F&W calls for Italian weather in Aberdeen and here it is!

And more photos are are here. There's been an ongoing row in Aberdeen about the proposal by local businessman Sir Ian Wood to donate £50 million towards a new civic square. Singer Annie Lennox is one of the objectors:

Lennox, who has attacked the scheme as civic vandalism, declared on her website: "Concrete wins out. Something told me that this was already a done deal – no surprises really."

I'm not that familiar with Aberdeen and have only visited the city three or four times. Generally, I've assumed that what motivates many of the objectors to Sir Ian's proposed gift is a distaste for capitalism and I think I'm correct.

Nevertheless, the plans I've seen in the papers did indeed demonstrate "civic vandalism" as claimed by Ms Lennox. What I saw would be out of place in our worst council estates, never mind in the centre of Scotland's third city.

But what about this:

Sixteen months ago, when Sir Ian first announced his philanthropic £50 million donation towards the project, he said his aim was to transform the five-acre site into a square that would be a combination of a grand Italian piazza and a miniature version of New York's Central Park.

He said: "I actually used the words a 'mini Central Park.' It was never setting out to be concreted. But the initial diagrams and designs produced showed a big concrete base.

"There has been this continuous myth that this is a big flat concrete square that is going to possibly involve retail and shops. It has never ever been that."

So now it turns out that Sir Ian wouldn't be funding a concrete disaster after all:

John Stewart, the leader of the city council, who led the move to back Sir Ian's proposals at Wednesday's marathon meeting of the authority, admitted he had been "appalled" by the early concept drawings for the project. They had created a "rod for the back" of those supporting the visionary scheme.

Sir Ian Wood became very rich by providing world-class services to the oil industry. I doubt that any of his presentations to clients were misleading. If they had been he wouldn't have been so successful. And yet when he tries to donate £50 million to his hometown the PR goes haywire. I suspect that the local politicians and bureaucracy are at fault here for not showing the locals just what was planned with Sir Ian's money. Let's hope that Aberdeen gets its Central Park, preferably with Italian food, wine and weather...
Posted by David Farrer at 15:37 1 comment: The election in the Athens of the North

For the first time in my life I was uncertain as to how I would vote in a general election. In all previous ones I have voted Conservative with various degrees of enthusiasm. Obviously in 1979 it was necessary to remove the Labour government that had brought us inflation that eventually reached over 20%. No country can survive that. By 1997 inflation was down to just over 3%.

At the last Holyrood election I supported the SNP, partly as a tactical vote to remove the Labour incumbents. On the same day I did cast my vote for the Tory candidate for the Edinburgh City Council. I voted SNP in the recent Euro election.

I am fairly sympathetic to the idea of Scottish independence. A vigorous dose of fiscal reality would do wonders for Scotland. But ideally I would prefer implementation of the Freedom and Whisky plan of 2003:

Withdraw from the EU

The federal government should be situated on the Isle of Man, which is not in any of the home countries but is equidistant from all four of them

The Irish Republic should be invited to unite with the North and rejoin the UK with Dublin taking its rightful place in the Anglosphere alongside Cardiff, Edinburgh and London

On Thursday morning I discussed my options with Mrs F&W:

(1) Vote Conservative even though they appear to be a bunch of wimps, unable to propose a proper classical liberal economic plan and distinctly wobbly on civil liberties.

(2) Vote SNP on the grounds that the UK cannot be saved and that an independent Scotland could possibly emerge satisfactorily from the wreckage.

I was still undecided when I got to the polling station. Next door was a cafe and I went in to have a further think. A copy of the Daily Mirror was on the table and needless to say it was full of reasons for voting Labour. At that point I was filled with dread and decided to look after number one. I didn't want Mr Darling to steal any more of my money. Despite what I wrote the other day, I held my nose, went in and voted Tory.

The candidates (well, most of them): 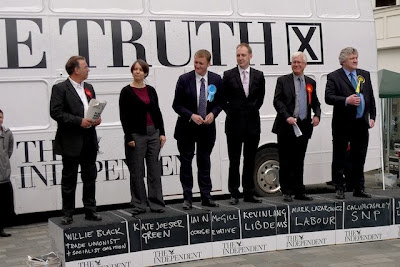 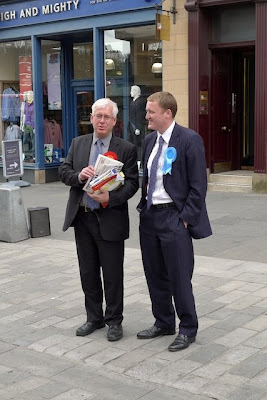 Iain McGill was the most convincing candidate but it was interesting to hear Willie Black - a very lucid but totally wrong old-fashioned George Galloway style of socialist. Mark Lazarowicz looked a tad uneasy when Willie was in full flow.

I've just been looking at an election leaflet from one of our candidates.

Here are some of the things he's been doing to persuade us to elect him as our MP:

Now some of these may be worthy causes but what have they got to do with being Member of Parliament for Edinburgh Southwest? Many of these concerns are the business of Holyrood or even the City of Edinburgh Council. Actually, most of them are properly the concerns of civil society and not any business of the political class whatsoever.

And here's the thing: Mr Rust's main opponent is none other than the Chancellor of the Exchequer, Alistair Darling.

So what does our Conservative have to say about the economy? To be fair, in his second leaflet Mr Rust does mention Tory opposition to the planned NI increases and he wants to cut government waste. Good. But then he wants to "protect" the NHS budget. Ah, the NHS: the envy of the world. LOL.

Mr Rust also wants interest rates to be low. But interest rates are a measure of a society's time preference. They aren't something to be decided by governments, but by people acting in the free market.

I have a horrible feeling that Labour's Mr Darling may well know more about economics than does our Tory hopeful.

Not that I'm going to vote Labour of course!