Who, exactly, is doing this "allocation"?

I've more-or-less given up on reading stuff about the economic prospects of an independent Scotland. We'd be prosperous or poor according to the extent that property rights are supported. That's about it.

But I just can't stop myself reading this sort of thing:

Scotland’s economic future would be brighter if North Sea oil and gas revenues were allocated on a geographical basis, as the IFS claims its public finances “look to have been somewhat stronger than the UK’s in recent years”.

However, the report warns that if Scotland was to receive oil and gas revenues based on its population rather than geography, the situation would leave the country’s economy in a much weaker position in the long term, due to public spending outstripping tax revenues.

Now I don't believe that the oil belongs to any government. It should be solely under the control of the companies that drill it from under the seabed. Subject of course to any justifiable compensation to fishermen who had previously mixed their labour with the relevant parts of the North Sea.

But if one accepts that government may tax the oil then it surely follows that the government of the country in whose waters the oil resides would be the one to levy any taxation.

The oil in question has already been allocated by geography and geology. Unsurprisingly, international law accepts that the vast majority of the oil in question lies in Scottish territory. If you're not too keen on technical legal matters, consult a map.

If the oil is to be "allocated" on a population basis then it follows that around 8.5% of the M25 would belong to the government of an independent Scotland.

The recovery of 5,000 comments

For the past few weeks I’ve been downloading old comments onto this new template and it’s been quite a job. So let’s go back to the beginning of Freedom and Whisky.

I started F&W back in April 2002 using the original system developed by Blogger.com. Back in those days blogs didn’t have comments. Then a company by the name of Haloscan came up with some software that could be placed onto the Blogger template and this enabled commenting on Freedom and Whisky.

After a while Google acquired Blogger but the only difference was having to log on using a Google password instead of a Blogger one. Haloscan was also acquired by another company – in this case Echo.

Google gradually introduced various new template styles and the later ones included built-in commenting facilities. I resisted upgrading the template because of various reports that I may lose old comments. That was probably a mistake.

On 1st April (Ha! Ha!) this year Echo (formerly Haloscan) announced that all comments would disappear on 1st October. Not to worry though, I could download something called an “XML file” and use it to upload the historical comments to another commenting provider.

I then decided that it really was time to use an up-to-date Google template.

Many web searches indicated that the Disqus system would best be able to cope with this, but, alas, that was not to be. To cut a very long story short, Disqus managed to "download" around 160 out of 5,000-odd comments from the XML file to the new template, but without any of them actually being readable on the blog!

Back to the drawing board.

I went back to the original template. By an amazing stroke of good luck I discovered that I could change the Haloscan/Echo system's controls to show the comments directly onto the face of the blog rather than it being necessary to click through to read each post's comments. That meant that I could copy and save all of the monthly archives, including comments, into around 120 files instead of perhaps 5,000!

I did that during August and September.

Then I switched back to the new template and started the process of copying and pasting the old comments onto the new template, with each post's comments being transferred as a batch. The job was finished earlier today. Here's the control document: 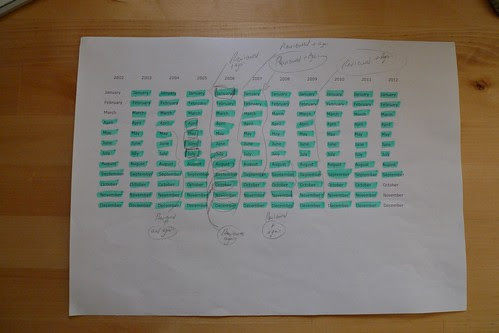 P1030623 - 2012-11-05 at 14-52-26, a photo by David Farrer on Flickr.
Almost all comments ever written have been transferred, although quite a few in 2003 seem to have completely disappeared from the commenting history. And since then only the last 25 comments from each post have been recovered. The vast majority of posts attracted less than 25 comments but some did go up to 57 comments!

Nevertheless, I reckon that around eighty to ninety percent of all comments now appear on the new template.

If any aggrieved commenter has records of any missing comments please get in touch...