From Europe: A History by Norman Davies:

In the late eleventh century, when a Byzantine princess arrived in Venice to marry the Doge, it was found that she ate her food with a golden fork. She was reprimanded by the Bishop for anti-social behaviour.

The SNP postcard waiting for me tonight says:

It's that last one I liked: "We will reduce class"

There are of course only two classes: taxpayers (the working class) and tax-consumers (the ruling class).

For the SNP to "reduce class" must mean that they plan to do away with the tax-consumers - there's got to be some workers!

Or am I missing something?

The usual suspects are going on about world poverty again:

Scotland's political parties set out their plans on international aid at a hustings event on Sunday.

Wouldn't it be wonderful if a candidate - even one - were simply to call for a policy of unilateral free trade?
Posted by David Farrer at 08:58 1 comment:

There's been much amusement across the blogosphere today about Gordon Brown's failure as a gold investor.

If only Brown had read these people! Like yours truly. My gold shares are up 85%. LOL, as they say.

Posted by David Farrer at 19:36 No comments:

No Smoking, No Stags, No Hens! 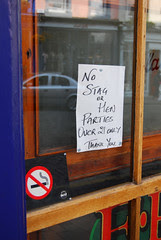 Not the Albania of the north!

My argument is this.

Scotland's share of "identifiable" public spending is higher than that of the UK as a whole. By "identifiable" we mean the lump sum sent to Holyrood plus non-devolved functions like social security that are clearly attributable to individuals. There's considerable disagreement as to whether Scotland gets its "fair" share of the rest of government expenditure. For example, I've seen reports that Scotland is debited with its share of the Millennium Dome, planning for the London Crossrail, the English prison system, and, through the lottery, the London Olympics. There's also a lot of controversy about the amount of tax collection that's attributed to Scotland.

But the extra "identifiable" spending has been totally wasted. It goes on higher pay and pensions for workers in the Scottish public sector without any corresponding efficiency gains. If anything, Scotland's once-proud education system is now worse than that of England - despite the extra money.

So why is this being done?

If we look here we can see some figures for the 2005 General Election.

Labour's share of the UK vote was 35% although they got 55% of the MPs. But in Scotland Labour got 39% of the vote and 69% of the MPs. The first-past-the-post method of voting benefits the winner disproportionately but that effect is magnified in Scotland because up here we have a four party system. I can't find later figures but the Edinburgh City Council result for 1995 was a 41% vote share for Labour but a 59% seat share. In Glasgow Labour got 61% of the vote but 93% of the seats! In both cities Labour was about 50% over-represented.

What this means is that a given amount of spending on Labour's natural constituency will go further in terms of electoral benefit in Scotland than in England.

It's in Labour's electoral interest to build up a class of tax-funded serfs, both in Scotland and in the UK as a whole. But the payoff is proportionately higher here as the voting statistics show.

However, that doesn't mean that Scotland is some kind of northern Albania. We're number four (out of twelve) in the UK's economic output table, generating wealth at 96% of the UK rate (excluding oil revenues). The higher "identifiable" spending is wasted. In fact it's harmful, as those bloated public sector wages and pensions make it very difficult for the private sector to compete.

Scotland - inside or outside the Union - can survive perfectly well without those bribes to Labour voters. But can the Labour Party?

The two protagonists are fighting again.

SCOTLAND'S leading public finance expert has issued a savage attack on the SNP, accusing it of "lacking the fiscal competence necessary for governing", and describing its plans for tax cuts as "a nonsense".

The language and tone of Mr Midwinter’s comments on the SNP’s financial plans are more appropriate to a press release of a political party rather than a balanced analysis.

We're in danger of losing the big picture here. Instead of arguing about 1.5% or 3% efficiency savings, we should be asking this:

Is there a case for voting SNP so as to give Labour a bloody nose?

Is there a case for voting SNP because you think Scotland should be independent?

Answer: Yes. But if you believe this there's no point in being drawn into arguments about the financial minutiae.

The real question is whether the country should be independent or remain in the UK. It really isn't a matter of money; it's an emotional thing. The Nationalists are quite correct to say that Scotland could thrive as an independent country, and that would be true even without the oil. Our per-capita GDP is only just below that of the UK as a whole and is close to the European average. What we would need of course is some decent politicians - most of the present lot would have to go.

I gave my views on the question of the Union here (Scroll down if necessary.)

One of the things I wrote was this:

Anyone knowing history can only be impressed by the overwhelmingly positive things that have come out of the UK. I'm not convinced that the Union's time is up.

But I'm beginning to wonder, as are others. For the first time in my life I am approaching an election without knowing for whom I shall vote.
Posted by David Farrer at 11:35 2 comments:

This week's Roundup is now available here and was written by yours truly.
Posted by David Farrer at 06:49 1 comment:

Scotland's tallest building will create 2,000 jobs when it is completed next year, its builders have announced.

The 134m tower will have a mixture of retail space, offices, a swimming pool and housing.

I'm all in favour of new development in Glasgow but just because 2,000 people may work in this tower doesn't mean that there are any new jobs at all. Some of the employees may come from older buildings that are knocked down. Some may come from buildings that are switched to residential use. In any case, the building itself won't create any jobs - that's done by entrepreneurs. Indeed, if the tower contains government bureaucrats there may well be a net loss of jobs in Glasgow.

Everything is explained here.

Posted by David Farrer at 19:37 No comments:

The best wee numpty in the world

Thanks to Tartan Hero for this fantastic video.

Surely the game's over for Labour when everyone's laughing at them.

Posted by David Farrer at 10:15 No comments:

I changed my year-end at Companies House from January to March a few months ago but I can't actually send my Corporation Tax form in yet because I'm still waiting to hear if the taxman will accept accounts for a 14 month period. They wouldn't tell me over the phone and haven't replied to my letter of 9th March.

Government efficiency. Who can beat it?