Just when I thought that the state could sink no lower I read this:

A transplant ambulance driver has been found guilty of speeding while travelling from Edinburgh with a human organ on board.

Andy Thomson, 46, from Blyth in Northumberland, got three penalty points and a £60 fine.

Fortunately the liver was delivered from Edinburgh to Leeds in time for a transplant operation.

It seems that there's such a thing as a "Section 37 exemption" that may be used to rule out speeding prosecutions in emergency cases. So why no exemption this time? Here's the shocking answer:

"Lothian and Borders Police have made it very clear that they will not accept a section 87 exemption from private ambulance operators, despite the fact that the exemption is only ever used in emergency situations when we are working under contract to NHS Blood and Transplant."

So is it more important to attack private suppliers than to save lives?

The Mail carries an article by Dominic Sandbrook about Ferdinand Mount's new book.

Mount's theme is that Britain is run by an out-of-date and out-of-touch self-perpetuating elite. I have no argument with that, but I don't quite think that Sandbrook or Mount have understood the real problem.

Mount gives the example of High Bickington, a village in Devon which put forward a much-needed scheme for 36 new homes for poor families, 16 private homes, a school and a community centre.

Everyone backed it. The district council approved it. So did the county council. Even the relevant minister in London liked it. But the scheme died, crushed by the Government Office For The South West — just one of thousands of quangos of faceless, unelected bureaucrats.

We are obviously expected to take the side of the locals against the distant bureaucrats. But I don't think that we've got enough information to make a proper judgment on this particular event.

For a start, who owns the land in question? Does the legitimate owner wish the proposed development to go ahead? Who was going to fund the homes, school and "community centre"? A private developer is unlikely to say that he's building homes "for poor families": this sounds to me like a proposal to spend taxpayers' money, not a private investment. And something called a "community centre" is almost certainly a creation of the state. The same state that is resolutely destroying real community centres - otherwise known as pubs.

And perhaps the Office For The South West is filled with sound libertarians who are opposed to what sounds like a boondoggle. Or maybe it's the other way round and I've unjustly maligned a genuine local development that's entirely funded on the free market and that's being attacked by wicked statists in the OFTSW.

I strongly suspect that neither group is standing up for the rights of legitimate property owners. That would be an astounding development.

Mount's point seems to be that local is good and distant is bad without considering the rights of the property owners involved.

The real aim should be to defend liberty wherever it is located and that means reducing the powers of politicians and bureaucrats whether they are in Parliament or Parish, or in Quango or Council.

Readers may be wondering why comments are currently appearing in the main view rather than in a separate clickable window.

It's all to do with the closing down of my current commenting system at the end of September. The Freedom and Whisky template goes way back to the days when Blogger was an independent company. Back then, there were no commenting facilities on the template. After a while a company by the name of Haloscan (subsequently acquired by Echo) provided free commenting software that could be inserted into the Blogger template. That's what I've been using all these years.

The Blogger company was eventually bought by Google and I now post via a Google log-in. Newer Google templates have their own built-in commenting facilities but I've always resisted upgrading my template in case the old comments couldn't be migrated across. Now Echo has announced that the comments will be switched off from 1st October.

First, as advised by Echo, I have downloaded the historical comments into something called an XML file. I think that some very early comments didn't make the journey... Apparently it's possible to transfer these historical comments into one of the newer Google templates that has commenting facilities. At some time I'll upgrade to one of these new templates but what's not clear is this: Will the XML file of old comments make it onto the new template given that they were originally posted onto an old one?

Ever since this blog started I've been backing up my monthly posts onto Word documents. As a result of making an adjustment in the Echo system the comments now appear on the main blog page rather than in a separate window. So I am now able re-backup every month's postings with all comments being visible, thus giving me a complete historical record. Also, the backups are now going into a Textedit file instead of Word and that maintains all of the clickable links and all of the photographs. At some stage I'll probably print off the whole thing.

After the new backup's been completed I'll switch to one of the current Google blogging templates and attempt to upload the XML file of comments. If that doesn't work I can always copy and paste the old comments onto the new system...

Can anyone think of a better way?

Posted by David Farrer at 12:26 No comments:

This is a great book that should be read by everyone.
Posted by David Farrer at 15:32 No comments:


The Scottish Libertarians are developing nicely and plan to become a political party:

There are a few big announcements to make. The National Council of Representatives (NCR) for the Scottish Libertarians has been quite busy laying the foundations for the party.

The working draft for the party manifesto is now available for reading on-line at the website and it has already created a bit of a storm. The official version has to wait until after the first Annual General Meeting where members can debate, argue, re-write, and finally vote on the final version.

I hope to attend their Edinburgh meeting tomorrow.

The Statement of Principle of the Scottish Libertarians is excellent and can be found here.

Posted by David Farrer at 09:43 No comments:

A fundamental error in Austrian economics!

Earlier today I started to read the excellent pocket-sized version of Man Economy and State along with Robert Murphy's Study Guide to the great work.

Imagine my shock when I came across a fundamental error. 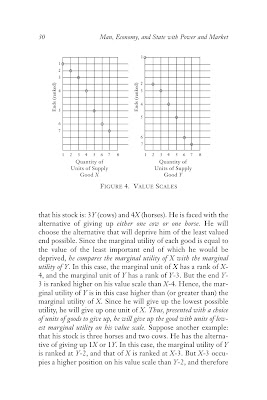 Line x4 on the left hand diagram should be one row down, i.e. one line below Y3!

Thank goodness my forty-year-old version of the great work had things correct, otherwise I might have given up 2% into the book and never have become a libertarian...

Posted by David Farrer at 16:29 No comments:

Mrs F&W and I went down to Newcastle to attend the Liberty League weekend conference. We hadn't quite realised that this was essentially a student event but we were made welcome and had a thoroughly enjoyable couple of days. Some of the speakers I'd met before - Kevin Dowd, Madsen Pirie, Claire Fox and Alex Singleton.

When we arrived I didn't recognise a single name on the attendee list - but that's a good thing is it not? There are now so many libertarians in the country that one couldn't possibly know all of them.

At Newcastle Central Station I noticed quite a few attendees making their way homeward. (To think again?) . I enjoyed a pint of Guinness with vertical black and cream stripes, specially produced to mark Newcastle's defeat of Liverpool earlier in the day. It was, after all, the First of April...