Work commitments mean that posts will be few and far between (if at all) for the next week or so.
Posted by David Farrer at 14:26 1 comment:

I visited Glenrothes Airfield a month ago and have posted some of the photos over on Scottish Clouds.

For those who don't know, Glenrothes is in the county of Fife... 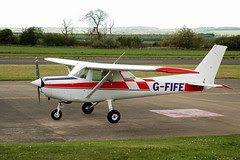 I told you so!

Only two weeks ago (scroll down) I warned what was on the cards.

And today there's an "exclusive" in the Scottish Mail on Sunday:

Scotland is set to become the first country in Europe to ban alcohol for under-21s as part of a radical shake-up of licensing laws.

The controversial crackdown would also see all members of the public limited to only four alcoholic drinks per visit to a pub or club.

So, we become an international laughing-stock, we kiss goodbye to much of the Edinburgh and Glasgow tourist business and, just like 1920s America, we create a vast criminal class. The tyrannical morons who propose things like this have no understanding of human behaviour. The insane "war on drugs" is the biggest subsidy to crime in history, and now some idiots want to expand it!

Restricting freedom merely drives the target underground. Does anyone think that the five-pints-a-night man will refrain from upgrading to a higher-strength beer? Will those of us who prefer something less powerful find that our's is the one to be dropped by the breweries?

Then the "human rights" lawyers will have a field day. Poor old Joe Bloggs in his one pub village is limited to four pints. He realises that his cousin in Edinburgh can buy 2,400 pints a night quite legally - there are around 600 pubs in Edinburgh. This is discrimination against those living in the countryside. Ruralism, we could call it. At least it's another earning-opportunity for the likes of Cherie Blair. In fact, Joe's Edinburgh cousin may well decide to get as many in as possible before ID cards or forehead bar codes limit him to four drinks a night.

To hell with betting on the World Cup - I'm off to place a bet on when Scotland will see its first lynching of a politician.

This article by the Liberal Democrat group chairman on Edinburgh council is behind the Scotsman's subscription window. Nevertheless, comment is necessary.

Councillor Rev Dr George Grubb writes at length about the "good old days" when the police were usually on the side of the law-abiding and hadn't yet become Gramscian tyrants. In general, I agreed with the Councillor until I came to this bit:

It is impossible to turn back the clock. Police discretion may be the casualty of too much legislation on individual rights.

What rubbish. The legislation that's caused so much trouble (supported by the LibDems) hasn't been in favour of individual rights, but against them. That's what the Gramscian project is all about. "Individual rights" aren't about doing whatever one wants, but about doing what one wants as long as one doesn't infringe upon the equal rights of others. In the good old days Liberals understood such matters.
Posted by David Farrer at 16:58 No comments:

Conservative Home has a piece on possible Tory support for a minority Labour administration after the next Scottish elections. Brian Monteith, an independent conservative MSP, opposes this plan.
Posted by David Farrer at 09:26 1 comment:

I enjoy reading some of the American conspiracy sites on the web. Looking at the World Cup schedule tonight I noticed that we could have had a group containing the USA, France, Iran and Mexico.

Would such an outcome be attributed by the conspiracy buffs to:

Posted by David Farrer at 09:47 No comments:

This article by Duncan Hamilton is behind the Scotsman's subscription wall, but this is priceless:

SOMEONE with too much time on their hands once discovered that "Tony Blair MP" is an anagram of "I'm Tory Plan B".

Actually, that's not the priceless bit - I read that one years ago.

But how about this:

one anagram of "Conservative" is "craven soviet".

The coming closure of Scotland's pubs

Mark my words; it's going to happen:

Alcohol misuse has been identified by ministers as Scotland's next major health issue, it has emerged.

This is from the SNP:

"Simply legislating against irresponsible drinking will not work. A comprehensive solution will only come from a co-ordinated approach from all of these groups.

"That's why I'm calling on drinks companies as a first step to follow a voluntary code of conduct regarding children and the advertising of alcohol.

And the second step? It's going to be legislation or, as we say in Scotland, a ban.

It's Scotland's whisky? You'll have had your dram.

Posted by David Farrer at 16:14 No comments:

I went through to Glasgow yesterday, and, as one does, took a few photos, had a few beers, went to Borders and just wandered around.

As I was walking along the Great Western Road I spotted and called into the Glasgow Apple Shop and had a wee peek at the new MacBook. I'd quite forgotten that I had my Nikon dangling from the neck when the salesman came up to me and asked, "Do you have your USB cable with you?" After a quick double take I realised that he wanted me to download my pictures onto the MacBook and perhaps be inspired to buy one of these desirable machines there and then.

I responded: "It's not a digital, it's a film camera."

You could have knocked him down with a feather.

I didn't buy the MacBook and ended up here instead where I read my pre-digital newspaper.

Which counties have you visited in mainland Great Britain and the Isle of Man?

Must get to the Isle of Man.

For the record, Dumfriesshire was the first and I eventually got to Orkney in 1985. I've also been to all six counties in Northern Ireland.

Thanks to this blog.