And you get to do it yourself!

The question I have is this: Has Annabel Goldie signed up to this policy? What, with law'n'order being devolved and all that.

Posted by David Farrer at 18:52 No comments:

Slaps forehead. Scrapes oneself off the ground.

But they've got this one right:

Scottish Labour, which is opposed to minimum pricing, said the study strengthened its argument that the measure would do little to cut problem drinking while penalising moderate drinkers and boosting supermarket profits

Needless-to-say I understand that Labour's opposition to minimum pricing is almost certainly simply because it's a policy of the SNP, not from any moral opposition to market rigging. Oh no.

No, Scotland's hard-legislating culture is a national disgrace. Drinking is voluntary; being legislated into serfdom isn't.

The state is not your friend (part 94)

Now this is an interesting one:

Ronnie Smith, the general secretary of the Educational Institute of Scotland (EIS), claimed the General Teaching Council for Scotland (GTCS) was “over-zealous” after John McHugh, an English teacher from Dundee, was removed from the teachers’ register after being banned from driving for two years and fined £400.

Smith said teachers were being removed from the register for relatively minor offences outside work that had no bearing on their professional skills.

I think that an employer should be able to dismiss an employee for any reason whatsoever. Subject to contract of course.

If the EIS were a genuine union that's primarily interested in its members' welfare they would have spotted the real issue here. Especially as they are teachers.

Posted by David Farrer at 08:58 No comments:

THE country is facing a gloomy future, Scotland's top civil servant has warned, with fears that reduced budgets will see a rise in compulsory redundancies.

But what Sir John is talking about are cuts in the public (sic) sector. The truth is that without cuts in the "public" sector we can't get growth in wealth creating businesses. I find it worrying when folk conflate the size of the state with national prosperity.
Posted by David Farrer at 15:57 1 comment:

Does the United States face a coup d'etat?

Some very well-informed people think that it's certainly possible.
Posted by David Farrer at 10:58 1 comment:

I met one of these two rappers

And four years ago I wrote about my meeting with Hayek.

The problem of beggars in Edinburgh

I see that the manager of the Balmoral Hotel is concerned about Edinburgh's burgeoning beggar population:

Ivan Artolli, general manager of the five-star Balmoral, said overseas visitors felt uncomfortable in the city centre. And he said Scotland's capital was the worst of 15 European cities he had worked in for begging.

I understand Mr Artolli's concern. Aggressive begging is just another of those problems that'll be resolved once our streets are properly privatised.

But one thing concerns me about this article: it only deals with the problem of city centre beggars. What about the suburbs?

The situation out there is much worse. Especially in the southwestern part of the city. One local resident is regularly begging Brits and foreigners alike to sub him for billions of pounds. Isn't that the real problem?

I am pleased to welcome the Caledonian Mercury, a new Scottish-based web newspaper. I have added the Mercury to my blogroll and also subscribed by e-mail.

Along with the excellent Scottish Review I believe that the likes of the Caledonian Mercury represent the future of journalism in Scotland.

I like print newspapers - I've read the Scotsman and the Herald for years, but they really do seem to have lost the plot. I'll miss them when they've gone. But I quite like the idea of photographing our last socialist politician being strangled with the last copy of the Scotsman.

I see that the Royal National Lifeboat Institution has had a record year.

Michael Vlasto, the charity's operations director, said: "The record-breaking figures in 2009 may be, in part, due to people holidaying at home in the UK and Ireland instead of planning holidays abroad during last year's financial uncertainty. However, we look at long-term trends and, as we start a new decade, the figures for the past ten years show our lifeboats have launched close to 80,000 times, rescuing 76,489 people."

The key word is "charity". The RNLI is one of the few genuine charities of any size.

Many so-called charities are fakes. A genuine charity receives donations from the public that are given voluntarily. Fake charities get much of their funding from the taxpayer - that's to say funds that are extracted by force - and/or are primarily propaganda outfits devoted to increasing state activity.

Posted by David Farrer at 08:43 No comments: 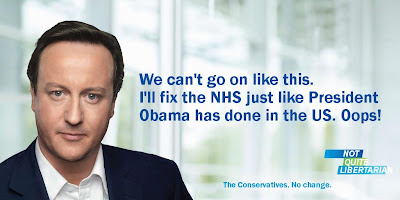 Posted by David Farrer at 08:47 No comments:

Posted by David Farrer at 20:58 No comments:

The conspiracy against small companies

Libertarians often point out that ever-increasing rules and regulations benefit large businesses who have the necessary administrative resources to deal with them at the expense of small businesses who don't. Indeed, it seems to be the case that many of these regulations exist precisely because big companies have lobbied for them. "Business" per se is not your friend. Liberty is.

A short while ago I attempted to do an online Annual Return for a small company. Twenty years ago I would fill in a paper return, take a photocopy, write a cheque and then send it off with proof of posting. Dead simple. Now one has to file online to get the cheaper rate.

So today found me at the keyboard thinking that all would be straightforward as I'd now got used to what I thought was the latest system. But no, things have changed again. Normally, all of the existing company information pops up and one just confirms "no change" for each item and eventually gets to the bit where the credit card information is entered. Not so today. I was asked why hadn't I entered the "country of residence" of the directors. This is a new requirement.

In the case of this English based company I had the option of "England", "Britain" or "UK". All were acceptable to the system but I was then asked, "When did this change take place?" But of course no change had occurred. I was tempted to enter something like 488 AD for the director residing in Kent. Isn't that around when it changed to being "England"? I wimped out and phoned Companies House and, after several attempts to get through, I was told to enter the date of the Annual Return as the date of the "change". I was also told that thousands of other people had been phoning about just this question.

I wonder if this is a cunning way of the government making money out of the phone calls. To think that we've sunk so far that I now have such a suspicious mind. Then there followed the problem of the credit card not being accepted. This was probably due to the system not understanding the Scottish flat numbering system. No wonder folk vote SNP. After a few more attempts I was able to pay the fee over the phone. After the revolution we'll get Ryanair or Amazon to take over Companies House.

The election is on!

I mean the Scotblog Awards of course.

Freedom and Whisky and Scottish Clouds have both been nominated.

Posted by David Farrer at 06:31 No comments:

I came across a post on Marginal Revolution entitled Why is Haiti so poor? It's asking the question in the context of yesterday's earthquake.

Sugar cane gave Haiti some early characteristics of "the resource curse," dating back to the 18th and 19th centuries.

Here is a definition:

Doesn't that just ring a bell?

So many Nationalists point to the oil revenues that would accrue to an independent Scotland. Unlike some, I fully accept that a vast amount of such revenue would come under Scottish control. And yes, I do know where the Anglo-Scottish border is drawn over the North Sea. But would such wealth benefit us?

Us? Those revenues would go to the Scottish political class, not to we the people. And I see no reason to expect that the political class of an independent Scotland would behave differently to how that class behaves in most other parts of the world. The money would be spent on the favoured clientele of the political class.

And so I think that Scotland would probably be better off by exchanging all the oil revenues for a single copy of the Swiss constitution.

I've just discovered that I became a libertarian 38 years ago this month!
Posted by David Farrer at 09:32 1 comment:

You know you're getting old ...

First of all, a Happy New Year to everyone.

I see that it's customary to give one's forecast for the coming year, so here goes.

May 2010: the Conservatives get most seats in the General Election but fall short of a majority. An approach is made to the SNP who agree to support the Tories in exchange for an independence referendum.

June 2010: Cameron makes this a "now or never" vote and the referendum is held on 24th June. No one in London has noticed that this is the anniversary of the Battle of Bannockburn and Scotland votes overwhelmingly for independence.

August 2010: to the surprise of many a free Scotland reverts to its natural state of "small c" conservatism.

The new cabinet is announced on the Glorious Twelfth.

Chancellor of the Exchequer: John Swinney

Secretary of State for Energy, Transport and Planning: Neil Craig

Secretary of State for the Privatisation of almost Everything Else: the Laird of Freedom and Whisky.

Other government appointments are also announced.

Governor of the Central Bank of Scotland: Sir Frederick Anderson Goodwin. This follows the recent surprise discovery of the world's largest oilfield underneath the headquarters of the ABN-Amro Bank.

Ambassador to the Court of St. James's and also serving as the Chairman of the Jockey Club and Social Secretary of the Garrick: the Laird Salmond of Linlithgow.

And a final surprise announcement is the new Keeper of Her Majesty's Muckle Flugga Lighthouse: the Duke of Kirkcaldy, Cowdenbeath and North Queensferry.