Why is it that the only e-mails identified as junk by Demon's e-mail system are Demon's own bills for Internet service provision?
Posted by David Farrer at 11:09 No comments:

I am gradually posting comments from the old template onto this new one. All comments for 2011 and 2012 should now be readable.
Posted by David Farrer at 12:05 No comments:

BBC uses one of my photos

The BBC has produced a rather good documentary on Hayek. My photo of Hayek taken outside Buckingham Palace appears at 53:37.

Thanks to Andy Duncan's blog for alerting me to the BBC programme.

News of the Wool

I'm in the market for a new sweater. My late mother used to work part-time in a shop in Keswick and they had a wonderful supply of sweaters made from the wool of the local Herdwick Sheep. No longer, as I noticed when I was down there recently. In fact, I was astounded at how difficult it seems to be to source another Herdwick sweater. There's a good business opportunity for someone.

But this creates opportunities for others. A bit of Googling led me to Mrs McCornack of Annan. And then I found these folk, also of Annan. A coincidence you may think?

Actually no. I was born in Annan and it looks like I've found the answer to the missing Herdwick question.

Support your local sweater.
Posted by David Farrer at 17:22 No comments:

The question of Heathrow expansion has been going on for as long as I can remember:


The announcement means that the debate over whether Heathrow should have a third runway, or whether a new airport should be built in the Thames Estuary, which has split the Conservative ranks, will drag on for many more months.

For some reason a third Heathrow runway would take around ten years to construct and Boris Island even longer. But what no one ever seems to mention is the real nature of the actual problem.

All of the UK's transport, employment and housing problems are caused by our having an extraordinarily centralised government that is located at one corner of a long and narrow land mass. Not only that, our capital is at the corner of the island that is nearest to the rest of Europe with all of the resulting advantages.

There are three ways out.

The best solution is to get rid of at least ninety percent of government activity. In such a paradise there would no longer be all of those government jobs in London but also no reason for so many private companies to locate there.

Next best would be to establish a proper federal system with the national capital on the Isle of Man. Preferably this would include a reunited Ireland. Again, that would result in a radical decentralisation of the UK.

Finally, if we really can't do without an oversized, hugely centralised and non-federal state, we should move the UK capital to Glasgow. We have the airport capacity. HS2 can start at the top and proceed southwards. To the provinces... And surely there's a Cameron tartan so that the PM could legitimately claim his state kilt on expenses. Then there'd be a British football team, based at Hampden Park of course. And I'm sure that the Queen would love to spend more time at Balmoral, enjoying drams with the Keeper of the Royal Stable, Lord Salmond.

A rebalanced UK would solve so many of our problems. Forget Boris Island and LHR3. Move it all up here.
Posted by David Farrer at 19:03 No comments:

I've ditched the Disqus system as according to their site it's failed to load comments older than two years but they didn't show on the blog up anyway!

Back ups of all previous comments are on my computer and I may try to reinstate them at some time in the future.
Posted by David Farrer at 19:10 2 comments:

OK, so it wasn't taken in Scotland. Or perhaps it was! Cumbria used to be part of the Kingdom of Strathclyde... 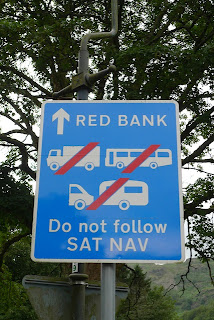