Hearts have confirmed their players have not received their wages on time for the second time this season.

If the players don't get paid they aren't going to win, are they?

But on the other hand:

Hearts extended their winning run to five matches with victory over Rangers at Tynecastle.

Do we actually need to pay them?

Seriously though, and writing as a former finance director, the one thing you avoid at all costs is not meeting the payroll on time.

They're from Dumfries and Galloway

Posted by David Farrer at 16:16 No comments: 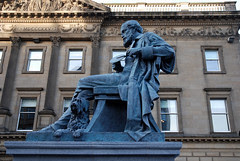 Here are some photos from the James Clerk Maxwell statue unveiling.

Posted by David Farrer at 15:20 No comments:

Will General Motors file for bankruptcy on Monday morning?

Probably not. I expect that the politicians will bail GM out. But maybe its time is up.

If you accept the Austrian view of economics - as I do - then this whole financial mess won't resolve itself until all of the world's malinvestments have been liquidated. By malinvestments I mean everything that's been spent on business ventures as a direct result of all that monetary expansion that wouldn't have occurred in a free market.

Bailouts by Bush, Brown and the rest may delay the day of reckoning for a while but can't change the ultimate end game. The world watches. Gold was up 7.66% on Friday despite the manipulation.

(UPDATE: there's going to be a lot of anger before things are resolved. I bet McCain's glad to be out of it.)

So, train fares are going up again:

Train passengers in Scotland face a 6% rise in the price of most tickets from January - almost 2% above the current rate of inflation.

Hang on a moment; this implies that inflation is around 4%.

No, it's not. Inflation is actually running at 15.1%. The price increases will follow.

And we ain't seen nothing yet...

I note that the Secretary of State for Scotland has joined in the Strictly Come Dancing row:

"The fact is the judges don't know what this programme is all about.

"I watch the programme with my family."

Mr Murphy said it was "family entertainment and good fun and John is emblematic of that, rather than taking himself so seriously".

"I think we need to get rid of the judges rather than John."

What Mr Murphy has realised is that most people like to make their own judgment as to what they like. Yes, experts have their place, but when it comes down to it we like to have the final say and if the "experts" don't like it, then tough.

So why on earth is Mr Murphy in the Labour party? The whole purpose of that organisation seems to be to pick the most useless experts it can find and ram their opinions down our throats.

Posted by David Farrer at 11:50 No comments:

Do banks want our money?

One of my clients tends to have several hundred thousand pounds on deposit at any one time. I suggested that it might be a good idea to spread the cash around three banks instead of one. The Board agreed and back on Tuesday 4th I wrote to HSBC, Barclays, Nationwide and the Clydesdale to see what terms they could offer. So far only one bank has responded. The Clydesdale replied by phone the next day and sent a follow-up letter. There's been nothing from the other three. Do they need our money or are they totally incompetent?
Posted by David Farrer at 18:18 1 comment:

General Motors has been a bit down recently but it's gone up again today.

Posted by David Farrer at 17:58 No comments:

... at the moment and have a chest infection.

Earlier today I decided to go out for a drive. Perhaps inspired by this photo the silver Hyundai headed out on the A90, over the Bridge and into deepest Fife. Yes, I was on my way to Glenrothes. 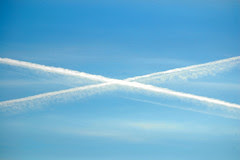 The first thing I noticed was the compete absence of posters on lampposts. Here in Edinburgh elections mean party posters on virtually every lamppost to be seen. I noticed the same phenomenon in Glasgow during the recent by-election over there. Turning off the main road I drove through the village of Cardenden, home place of Ian Rankin and, inevitably, Inspector Rebus. I saw one window poster - for the Labour candidate Lindsay Roy. That was your lot.

When I got to Glenrothes proper I had a wee drive round the town and then parked by the main shopping centre. I paid my £1 for all day parking and went into the overheated mall. You could have been anywhere in the UK judging by the shops. At the far end I did see a TV cameraman talking to a couple of press photographers but there was no sign of any action. Back nearer the car I spotted some yellow balloons outside. I was handed a leaflet, which contained an attack on "greedy bankers who bet everything on black and want bailed out when it comes up red." Aha! Some libertarians? Sadly no: they were from the Scottish Socialist Party, and also called for "free" school meals, "free" public transport and "free" prescriptions. "Free" at the point of consumption I presume. Where's Adam Smith when you need him?

Then I spoke to a lady at the SNP stand.

"David Farrer, I blog at Freedom and Whisky."

"And I'm one of your readers, she replied"!

It turned out that I was speaking with Tricia Marwick, the local MSP.

I was told that the lamppost laws are different in Fife. We chatted about the campaign and also about the American election. Obama reminded Tricia of Tony Blair. That wasn't a compliment. I defended Sarah Palin on the gun question and was reminded that politicians here haven't yet realised that crime goes down when law-abiding folk are armed...

Ms Marwick pointed me in the direction of Markinch, which is a pleasant little village on the edge of Glenrothes itself. There I found the SNP headquarters. I parked the car and just walked right in. It occurred to me that I'd have been shot by now had I been at the Obama or McCain campaign offices without an appointment. After explaining that I was a blogger, a media lady was called to speak to me. We had a nice chat and I heard that there was no sign of any "Brown Bounce" in Glenrothes following his recent career move to become saviour of the world's finances. Quite the opposite, if anything.

I was told that there was to be a "photo opportunity" in the nearby Carlton Cafe and that I was free to go along. I sat down and ordered a coffee. A few minutes later in walked Peter Grant, the SNP candidate, together with the First Minister himself. They sat down at the next table where they had a televised and photographed chat with two "switching" voters. A small group of protesters were also in the Carlton and they were objecting to the SNP's lack of funding for their group. Salmond offered to talk to them later. After taking a few photos, I left.

Afterwards it occurred to me how lucky we are that an unknown member of the public can walk right into an election campaign office, without producing any ID, and then sit in a public cafe at the table next to the country's First Minister with no vetting whatsoever.

Of course, the young mother and father with the two children at the table to my right were probably from the SAS... 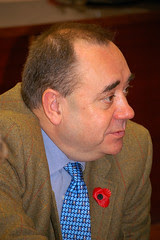 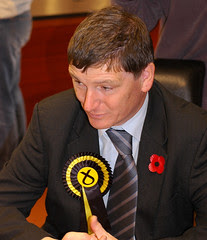