I see that National Savings has pulled its index-linked products:

Experts yesterday accused the Government of punishing the responsible behaviour of savers as it battles its own deficit.

“Consumers who have been increasingly relying on the one sure fire way of protecting their nest egg from inflation will be dismayed that the government has without any warning, pulled the rug from under their feet.”

I had an enjoyable run-in with a socialist worker activist in Princes Street a week ago. He asked me to sign a petition against the "Tory Cuts". I said that unfortunately there weren't any such cuts. He said that the cuts were 25% per year. I countered by saying that he should have said 25% over four years but that was outweighed by continuing additional spending elsewhere. The debt is still rising, albeit at a reduced rate than under ZNL. He refused to believe me.

And now National Savings are stopping the sale of index-linked savings. Fortunately I switched some cash into them a couple of weeks ago from a deposit account that now pays 0.5% pa. Inflation's coming folks.

Is this guy for real?

I know that the article on charity "chuggers" is meant to be taken with a pinch of salt, but really!

those charity muggers who stop you in the street and ask you to sign away your life savings to causes, all of which are invariably worthy.

It looks like Mr Dalgarno is just another useful idiot who can't be bothered to work out a consistent moral and economic philosophy. And there's plenty more like him.

Posted by David Farrer at 21:46 No comments:

Our airport is in the news at the moment.

Here is the important story:

A STRIKE ballot of airport staff over pay and conditions has raised the prospect of more flight disruption in the Capital.

The Unite union will ballot 6000 members next Friday for strike action at BAA's six UK airports, including Edinburgh.

Here is the non story:

Now, I happen to agree with Richard Havers in saying that the airport's forecasts are probably too optimistic:

"They predicted far too rosy a future and now it's not happening they are desperately to claw some money back."

But what's extraordinary is the huge fuss that's broken out over the airport's plan to charge £1 for dropping off passengers outside the terminal building. This story has been all over the local media for a week or more and has generated a vast outcry, the likes of which I haven't seen for quite a while. Come on now: just how often does the typical Edinburgh resident drop off a passenger at the airport? It seems to me that what we're seeing is another outbreak of agoraphobia - fear of markets.
Posted by David Farrer at 18:53 1 comment:

I see that our bin men are back today. Unlike last Monday.

Why is it that the only people who seem to observe the Edinburgh Trades Holiday are those who don't actually trade?

I see that Scottish Enterprise (sic) is to get rid of 20 "bosses".

“These changes are about ensuring we can respond faster and more effectively to the opportunities to transform Scotland’s economy. By reducing the number of directors and removing internal management layers, we can speed up decision- making, react more quickly to what our customers are telling us and deliver projects and support that are focused on the big issues facing Scottish companies.”

Here's an idea. Why not get rid of the whole of Scottish Enterprise?

Have a look at their Business Plan. This organisation is costing us £276.9 million in the current financial year. I see that total expenditure is classified as "TOTAL CASH INVESTMENT". In other words they are describing all expenditure as investment. That alone disqualifies this organisation from serious consideration. Scottish Enterprise should be abolished immediately and the savings used to cut business taxation.

Have a look at RantinRab's piece, I'm a policeman. Grrrrr!

The same photo is shown in the Sunday Times News Review section and also on today's Scotland on Sunday website. 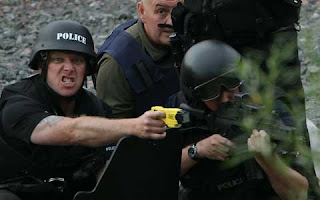 Here is a photo I've taken of the front page of the dead tree version of Scotland on Sunday. 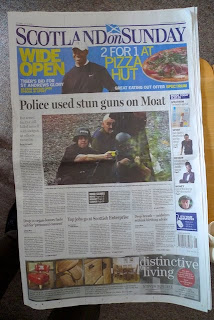 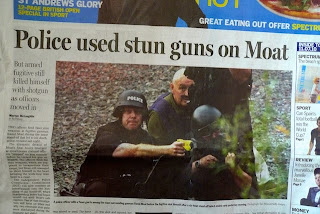 (I have taken a photograph of the SoS web page - just in case they change it...)

(UPDATE 1. Bill Cameron has pointed me to this.

UPDATE 2. The Sunday Times main section has the non-snarling version of the photo but the snarling one in the News Review section!)

Nothing new under the sun

I am now reading Robin Lane Fox's book on the Classical World.

I came across this today:

Romans regarded Greeks as essentially frivolous, people who talked too much and who were too clever by half. They were duplicitous, and quite unreliable with money, especially their own public funds.

I am currently reading Norman Stone's book on the First World War. Last night I got to the Battle of the Somme.

Coincidentally, I happened to be in Glasgow earlier in the day and saw this: 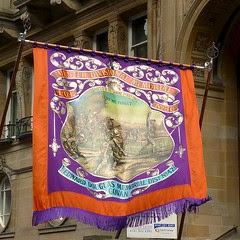 Lots of other photos here.