I've just come across these wonderful photos taken by Neil Aird at Prestwick. I remember those happy days so well. What's so different from today is the almost total lack of security at airports back then even though we were at the height of the cold war and Prestwick was very much in the front line.

(Other locations are here.)

The Scotblogs Awards has been announced:

As such, there will be two stages to the awards. The first stage, which will run from now until 6pm on Wednesday 13 January 2010, will be a nominations stage. I know that some bloggers prefer not to be involved in such blogging awards. So before voting commences, those who would rather opt out can, while everyone else can nominate their favourite blogs.

Posted by David Farrer at 19:45 No comments:

Calum Cashley has already been on the case over this report in the Scotsman.

The Government paper is alleged to indicate that Scotland would have "a massive £3.5 billion budget deficit" - the UK deficit last year was £49.3bn. Scotland has about 9% of the UK population, so our population share of the UK deficit would be £4.44bn, so Scotland is performing better in economic terms than the UK. Since 1980 Scotland is supposed to have an accumulated deficit of £23.5bn, but the UK has carried a £353.2bn deficit over that period, and Scotland's population share of that deficit would have been£31.79bn. So what the Scotland Office / Treasury report actually shows is that Scotland performs better than the UK economically.

I wouldn't be in the least surprised if the UK government is being economical with the truth about oil and deficits. But I've always thought that an independent Scotland could survive and prosper even with no oil revenues. In fact, we might even be better off without oil. What matters are the cultural attitudes of the population and the economic policies carried out by the government. Scotland has had a business oriented population in the past and it can have one again in the future.
Posted by David Farrer at 10:51 1 comment:

They could have timed this one better:

Delta Air Lines Inc. is mulling a partnership with a Nigerian airline that could result in joint marketing efforts between the two carriers as they seek to build business in Africa's most populous nation. 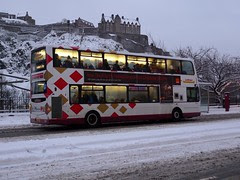 According to the British Olympic Association the planned London games aren't just about sport:

It was evident that the ‘sports benefit’ alone was not going to be a sufficient argument to persuade these two partners of the merits of mounting a bid – let alone staging an Olympic Games. Strategies were developed and deployed around regeneration, legacy, employment, tourism, new housing and the health of the nation.

The Mayor of London agrees:

During the Games, a steady influx of spectators will boost business, jobs and tourism across the capital and the UK. Visitors will need accommodation and food, and can be expected to explore all London has to offer in terms of shopping, attractions, theatre and more.

But it's all nonsense, isn't it? Britain is just about the most tourist-unfriendly country in the world. It's not merely that Shetland has more CCTV cameras than San Francisco's finest, but that the relentless war on photography by Britain's police forces continues despite repeated reassurances to the contrary.

I say enough is enough.

When the world learns of hundreds or thousands of Olympic visitors being harassed and arrested for taking photos of London's tourist sites one of our few remaining industries will be killed stone dead.

It's not too late.

News of the Cheese

I note with interest that the Universality of Cheese is back online.

In the Sunday Times today Mark MacLachlan tells his side of the story of how his blog went offline in the first place.

And doesn't this quote show that Scotland's parliament is perfectly capable of taking its rightful place alongside those of other nations?

The image of our parliament as a dignified cathedral for the cut and thrust of hard-edged debate goes out the window when one witnesses the jockeying in the Garden Lobby canteen. Here, MSPs, journalists, political TV correspondents, civil servants and lowly country mice like me jostle for a decent table from which to eavesdrop on political rivals. The amount of swivel-necking is a sight to behold as people indulge in conversations over each other’s shoulders, eyes keen on the prize of spotting the bigger dog, what they’re having for lunch and with whom.

From Page 1 of today's Scotsman:

A BLEAK forecast for Scotland's economy warns of "a slow recovery in 2010, with only modest growth likely" and says unemployment may continue to rise.

The assessment, from the Scottish Government's chief economic adviser Dr Andrew Goudie, suggests growth in Scotland is likely to lag behind the 1 to 1.5 per cent figure for the whole of the UK given by Chancellor Alistair Darling in this week's Pre-Budget Report (PBR).

From Page 23 of today's Scotsman:

A MILL worker who said her life's ambition was "to destroy the capitalist system" has become the first woman to be quoted on the Canongate Wall of the Parliament building in Edinburgh.

Move along please. No connection to see here...
Posted by David Farrer at 16:21 No comments:

Bring back the United Kingdom!

No, not the United Kingdom of Great Britain and Northern Ireland.

I mean the United Kingdom of Great Britain and Ireland.

Actually, that's not what I mean.

What we want is the United Kingdom of Ireland and Great Britain.

Capital to be Dublin. Finance Minister to be Irish.
Posted by David Farrer at 20:32 1 comment:

The year's most hilarious story

There's a call for banks to make more £5 notes available from cash machines:

Mr Bailey said: “In the New Year, I hope and expect that we will take these examples to other financial institutions and major retailers to make the case for a change of policy towards issuing £5 notes.

“We are very keen to get £5 notes into circulation.”

Of course, the best way to ensure that the high street banks feel that it's worthwhile to put fivers in cash machines would be for the Bank of England to stop inflating the money supply, thus making fivers more valuable.

Oh yes, who exactly is this Mr Bailey?

...the Bank’s chief cashier whose signature is on every note it issues.

Just throw away your pen!
Posted by David Farrer at 21:54 No comments:

The Times they are a changing

We were in the Edinburgh branch of Borders earlier today. Mrs. F&W said: "Seeing all these empty shelves makes you realise just how ominous are the economic signs." Absolutely right of course. Closing down before the Christmas rush: things must be really bad.

What I'll miss most about Borders is the tremendous selection of magazines. When we first bought the flat here in Edinburgh there was a WH Smith and a John Menzies on Princes Street, both with a large selection of magazines. Then there was the Edinburgh Bookshop on George Street. When it was acquired by James Thin the magazines went. I told the manager that I wouldn't be back. For books Waterstones was better but the magazines had meant that I used to patronise the old Bookshop. Borders gave us an alternative that we regularly frequented even though it's on the opposite side of town.

It's all part of the decline of the printed word, and I'm not happy about it. I subscribe to two American libertarian magazines. A couple of months ago I tried to resubscribe to one of them that I've read since the very first issue. I still possess every copy. Initially I was told that it was no longer economic to send copies abroad. They've now relented and will continue to supply me but at a considerably higher price than for an online subscription.

We're going to see more and more of this and I believe that's what's behind the MSM's animosity to bloggers. I understand their position: their livelihood is at stake. But, been there, done that and got the t-shirt. Mergers, takeovers and closures - yep, seen all of that. The market's always changing and that's often uncomfortable for us. But as Mrs T used to say: there is no alternative. We either accept change and adapt to it or we're out of the game. That's a message the MSM needs to take on board. As does Scotland, actually.

Mentioned in the Sunday Times:

There is Freedom and Whisky, a non–aligned libertarian with independence tendencies

A wholly accurate description from the MSM.
Posted by David Farrer at 13:43 1 comment:

I wonder what would happen if the Scottish Government were to withdraw all advertising from the Scottish mainstream press.