It looks like Heart of Midlothian will be selling their ground in Edinburgh and moving to the Scottish Rugby stadium at Murrayfield. To say that fans are unhappy would be an understatement:

With Hearts currently attracting an average home gate of around 12,000 this season, there has been real concern among supporters over what the atmosphere will be like in the cavernous bowl of Murrayfield with its capacity of 67,800.

Posters like this one are regularly displayed at Hearts games. Robinson is the current boss. 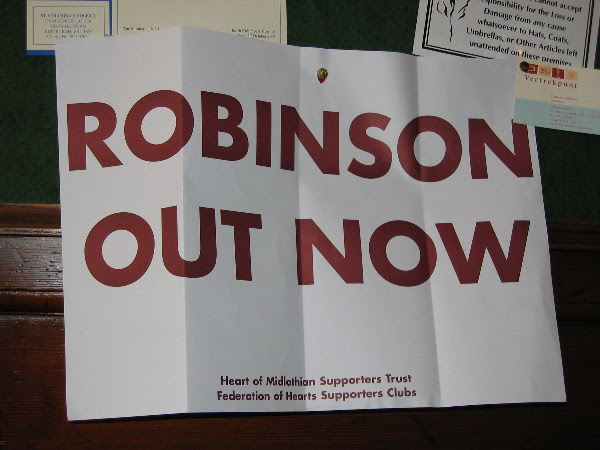 I must say that the planned move seems to be rather hasty as well as being tremendously unpopular with the fans:

This, despite a proposal from leading shareholder and property developer Robert McGrail to buy the stadium and rent it back to Hearts and a wide-ranging business plan from his brother Peter which would lead to a new Tynecastle as the focal point of a new multi-sports complex in a regenerated Gorgie.

One thing is certain: we don't need politicians getting involved in Scottish football.

But, of course, they are:

With Livingston, Motherwell and Dundee football clubs all forced into administration, Mr MacAskill is to sponsor a debate on how the Scottish Parliament might support the game.

"This is not a question of public money - there can be no bail-out - but we can look at the strategic direction and structure of the sport."

But we don't expect consistency from MSPs, do we?

Mr MacAskill called for money to be put into the sport via other development programmes.

"The Executive currently puts cash into youth development. I believe that opens up the opportunity to link this money to internal reform and play a proactive role in helping football through this crisis."

I think that football should consider the system used in the US. The team that does worst in the league gets first pick of the best players in the next season. That way we get competitive games that people will pay good money to watch. I'm not suggesting that politicians should lay down such a law but that the sport's governing body should change the current situation in which Scotland has two clubs with multi-millionaire players and all the other clubs being on the verge of bankruptcy.