Barry Turner spoke about his new book Suez 1956: The Forgotten War. This was an interesting presentation and several members of the audience had been in the Army at the time. During his national service Turner was put in charge of a transport unit despite his being unable to drive. Talking of Nasser, Mr Turner said that many western politicians didn't realise that much of what Middle Eastern leaders say is exaggerated for domestic purposes and shouldn't be taken too literally. I asked him if Israel should worry about the outbursts emanating from Iran. Turner said, "No." And tomorrow is the 22nd!

Robert Lacey gave readings from his Great Tales from English History. I thought this session was a bit of a letdown.

In the evening we went to hear David Wishart talk about whisky:

The conventional way to classify Scotch malt whiskies is by region - Highland, Lowland, Speyside, Islay and Campbeltown. But knowing where they are made doesn't explain how they taste.

Well now we do because there was a well-stocked and free tasting session after Mr Wishart's very interesting illustrated talk.

These guys were present providing some of the samples. 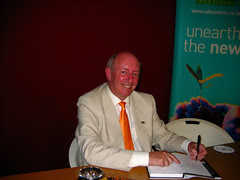 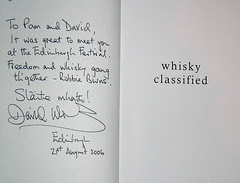