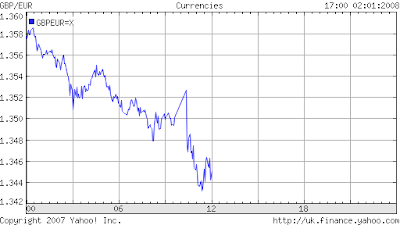 Andrew Duffin
"The move was welcomed by groups working with debtors."

wintermute
That should read:

I read about the "crisis". These things happen. When I was aged about 15 there was a great crisis in the Prestwick Airport Aviation Group. The dispute was the most important event in the world. Far more important than all those USAF nuclear-armed bombers flying over to beef up NATO and counter Soviet threats to Europe! When I went over to Prestwick a year or two ago for the Group's anniversary dinner all of the people on both sides of the row were there and I doubt if any of us would have been able to remember what it was all about...
6 January 2008, 17:35:23 GMT – Like – Reply

jameshigham
Well done on the Euro - enjoy it while you can, David.

...In the meantime politicians want to make it easier for people to go bankrupt...

APL
I have come to the conclusion the single most significant factor to the situation we are facing just now is inflation.

On second thoughts, I have come to the conclusion the single most significant factor in the situation we are facing just now is politically created inflation.