Other events that I went to were: Ewen Cameron and Christopher Whatley

Iain Dale and others

And last but not least: After all that it was time for a bevvy in a nearby hostelry:

For that kind of money they could get a new tram system, although it probably wouldn't get as far as the port...

According to this report:

The Los Angeles Unified School District spent $29,780 per student in fiscal year 2007-08. That’s way above the $10,000 as advertised by the school district, and as used in most studies.

For that kind of money they could all be sent to Fettes!
Posted by David Farrer at 08:51 1 comment: Links to this post

I see that Denmark has qualified for British foreign aid.
Posted by David Farrer at 08:45 No comments: Links to this post

The enemy of The Silent State Or real economics as I would put it.

Here is a PDF version of Eamonn Butler's recent introduction.

Posted by David Farrer at 09:54 No comments: Links to this post

This morning I heard John Kay talking about Obliquity – how our goals are best pursued indirectly. I'd heard Kay speak in Edinburgh a couple of times before and this was a fascinating session.

Kay had once served as a director of the Halifax Building Society who voted in favour of demutualisation. This resulted in Kay's receiving an e-mail saying: "Now we know who caused the financial crisis"!

Posted by David Farrer at 21:12 No comments: Links to this post

On Thursday morning we went along to hear David Kynaston talking about his new book Family Britain 1951 - 1957. The previous book in this series was Austerity Britain 1945 - 1951.

This was an enjoyable session, especially for those of us who (just) remember the fifties. Unsurprisingly, Kynaston was in "on the one hand and on the other hand" mode. Just as I was taught to say in essays:

I did get away with that!

Back to Kynaston. On the one hand people were perhaps too repressed in the fifties but on the other hand crime was very low indeed. I think that most of the audience were more interested in how to get back to an era of low crime without necessarily agreeing that they had been particularly repressed back in the fifties.

Posted by David Farrer at 19:57 No comments: Links to this post

Nice work if you can get it

There's been a big row over high "pay and perks" going to executives at the taxpayer-funded Scottish Enterprise (sic).

Rightly, some MSPs are speaking out:

Mr Park said: “These sums are absolutely astonishing. Most public-sector employees are being told that salary increases will be pegged at 1% but it appears there are different rules for those at the top.

“It is time the Scottish Government told these people to start living in the real world.”

Fair enough, but who exactly is this John Park? He is a Labour MSP!

Calling for a government to start living in the real world!

Truly, you couldn't make it up.

Posted by David Farrer at 07:52 No comments: Links to this post

I see that the UK's favourite university is a private one!
Posted by David Farrer at 07:24 No comments: Links to this post

I went along to hear Alistair Darling's much reported and pre-reported speech last night:

The Scotsman revealed yesterday that Mr Darling was preparing to launch a thinly-veiled attack on former prime minister Gordon Brown, saying Labour lost the General Election because it ignored the deficit.

Actually, despite being given several opportunities I didn't reckon that Darling was very critical of Brown at all.

The Donald Dewar Lecture was chaired by BBC Scotland's Brian Taylor who introduced Darling as a friend. Now, Taylor's a good chap and is probably a friend of most of our leading politicians. But "BBC Scotland journalist a friend of Scottish Labour politician" - not exactly the revelation of the week...

Darling was convinced that he'd done a good job and I accept that he was probably more competent than any alternative Labour chancellor, including his predecessor. But I heard no evidence of any real understanding of the nature of the economic crisis.

We heard some of the usual Labour tricks. Cutting government expenditure was "taking money out of the economy". I hoped in vain for Taylor to pick up on that Brownism. But, to be fair, it took David Cameron weeks to catch on to that one. Darling talked about Labour's plan to halve the deficit in five years. How many others in the audience realised that such a policy would mean that total debt would still be rising? As indeed it is under the current government.

Clearly there are no Austrian School economists in the Treasury, as Darling told us that no one saw the crisis coming. Actually, I think he quietly corrected that to "almost no one." Perhaps he saw this constituent lurking in the back corner...

Darling told us that the banks had made many mistakes. Often, they didn't know what sort of assets they were buying. He's right there of course. But he was wrong in saying that the British banks had avoided the subprime mess that hit the US ones. Northern Rock was invested in subprime mortgages and the big British banks bought the bulk pre-packaged portfolios of subprime from the American banks.

The most worrying thing was the total lack of any questioning as to why the banks were able to act so recklessly. The idea that the fundamentals of the very monetary system itself are wrong has clearly never entered Mr Darling's head. But he's not alone in that. We'll keep on going through these financial crises until we learn the lesson.

Posted by David Farrer at 18:43 No comments: Links to this post 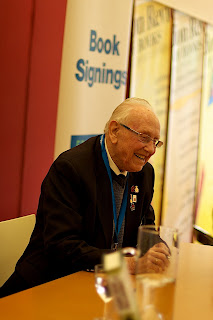 We went to our first event on Sunday morning. Ferdinand Mount was talking about his new book:

Full Circle: How the Classical World Came Back to Us, is a quietly passionate account of how our modern mindsets and practices are much closer to those of the ancient Greeks and Romans than we might realise.

An enjoyable session. Mrs F&W had already started the book and I expect to read it soon.

Time ran out before I could ask my planned question: "Your ex-boss, Mrs Thatcher, was both a scientist and a war leader. Would she have been more at home in ancient Greece or ancient Rome?"

Brian Monteith has this article in Think Scotland and also in today's Scotsman.

The change was not just about creating the property owning democracy as a buttress against socialism, it was about enriching peoples' lives by giving them an asset against which they could borrow, an asset that could act as a pension fund and provide an inheritance that could help families accumulate and retain their wealth.

The only thing I'd disagree with is that the houses were "given".

Blaming everything on "Thatcher" is a copout used by almost all Scottish politicians. It's a great pity that the SNP government seems to be quite unconcerned with financial reality. Ring fencing NHS expenditure is madness and bodes ill should Ms Sturgeon becomes the next SNP leader. But it's not just her, is it? Is there no one in the SNP who has an ounce of business or financial sense? Surely John Swinney cares about how he'll be seen by history. Posted by David Farrer at 10:09 No comments: Links to this post
Newer Posts Older Posts Home
Subscribe to: Posts (Atom)