Now it looks as though the starting date for the construction of the Scottish Parliament building may have been faked:

The Holyrood project was hit by a fresh political scandal last night when it emerged that construction companies were told they had to fit in with Labour’s election timetable if they wanted to win the main building contract.

Sir Robert McAlpine, one of the companies in the running for the contract, was told to make sure work appeared to start on site before the 1999 election so Labour politicians could claim the credit during the campaign.

Of course the Conservative-supporting McAlpine company didn't get the contract despite being the lowest bidder.

It's becoming difficult to keep up with the endless revelations that are coming to light in the public enquiry into this fiasco. Here's an interesting list of observations from today's Scotsman

• The reinstatement of Bovis for the main construction contract.

Bovis had been dropped from the shortlist by a panel of professionals on cost ground, because the company’s tender was too high. Yet Bovis was brought back unexpectedly by Barbara Doig the project manager and the company went on to be awarded the multi-million pound contract.

No-one has adequately explained why this happened.

• The decision to allow Bovis to change its tender.

Bovis had demanded hundreds of thousands of pounds to provide a parent company guarantee, a condition which made its bid one of the most expensive. This demand was dropped at the final interview and the company was awarded the contract, changing the basis on which it was judged by the Scottish Office.

Again, no-one has adequately explained why this was allowed to happen.

• The apparent breaking of EU tendering rules by failing to debrief McAlpine.

This was not done by the Scottish Office despite several requests from McAlpine.

• The selection of Enric Miralles as the lead architect without adequate insurance.

Firms entering the design competition had to provide evidence they could secure public indemnity insurance of £5 million. Mr Miralles failed to do so but still ended up winning the Holyrood contract.

The way things are going I wouldn't be too surprised to see some statue toppling by irate Scottish taxpayers. 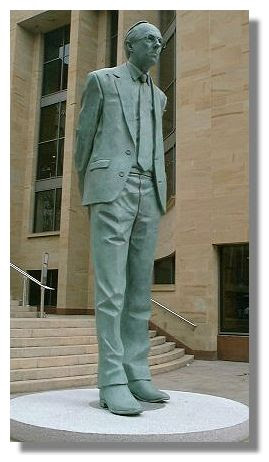