Letting the punishment fit the crime

The Scottish Executive makes a great deal of noise about fighting crime. It doesn't seem to have had much success. Maybe it's time to consider this novel approach:

When Sherelle Purnell sped away from Gordy's Tiger Mart without paying for $4.52 worth of gasoline, she probably didn't think the punishment would be three hours of court-ordered public humiliation. But from noon. to 3 p.m. today, the 18-year-old will be standing in front of the convenience store near The Centre at Salisbury on Route 13 wearing a sandwich board sign that reads: "I was caught stealing gas." Though Wicomico County District Court Judge D. William Simpson authorized the punishment, the unconventional sentence was the brainchild of Tiger Mart store manager Jan Phippsnovel

And here's the punishment: 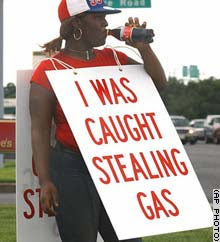 She probably escaped a longer sentence by wearing the baseball cap the right way round.

Robert Speirs
It's easy to think up novel punishments if your name is Phippsnovel.

Ian Bennett
The board should have included her name and address.
And we should do it here in UK, and damn the BMs from the human right mafia.

Quite so. I was amused to read an American website the other day on which someone said that the entire US economy would collapse if petrol went up to $3 a gallon. We pay double that and there's not exactly a shortage of traffic round these parts.

Squander Two
What amazes me is that $4.52 worth of petrol was worth stealing. In the UK, that sort of money would just about pay for the dribbles that fall on the ground next to the pump.

Harry Powell
I hope she paid for that coke!

Mark Holland
Didn't the Chief Constable of Nottinghamshire recently recommend some sort of pillory like putting crims' photos in the paper only for the "human rights" girlymen to throw a hissy fit?