Zooming in on the last of the Muirkirk signs we see this: 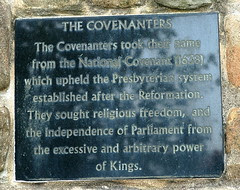 Muirkirk - 24 September 2005
Originally uploaded by David Farrer.
Over three hundred years ago people in Scotland were giving their lives for "... the Independence of Parliament from the excessive and arbitrary power of Kings". The problem we face now isn't to be found in the Monarchy. It's in the excessive and arbitrary power of Parliament itself, or rather in an Executive that ignores our rights and is in the hands of a Gramscian enemy class that the Covenanters would have understood only too well. What would they make of those sheeple today who don't give a damn for their rights as long as the benefits keep flowing?

On Sunday morning's drive I passed through the constituency of the late Robin Cook. The only signs of electioneering were posters from the Greens and the Labour party. No doubt Mr Devine will be sent to Westminster by a mindless public that doesn't understand that "There's No Such Thing as a Free Lunch."

Unless you're a gull of course: 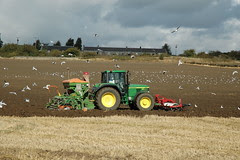 Colby Cosh
The typeface on the plaque is decidedly post-1970, even if the depth and eloquence of the sentiment seem antique.

David Farrer
The whole site looked fairly new to me.

Donald McCampbell
Are those signs new, David? Their shininess seems out of keeping with the language.