I am not a "right libertarian"

One of those I met was Shuggy and he appeared on the panel during the plenary session after lunch. Shuggy told us that the blogosphere had enabled him to become more acquainted with less well-known political ideas including "right libertarianism". Shuggy and I once co-operated over a matter of mutual interest back in our early blogging days. It seems likely that he sees me as one of those "right libertarians".

Except that I'm not. 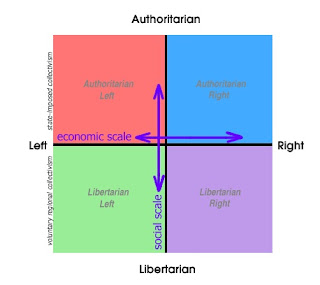 It seems straightforward at first. The vertical "social scale" line in the centre runs from "authoritarian" at the top to "libertarian" at the bottom. On this axis we can plot our attitudes towards civil liberties. The horizontal scale runs from "left" to "right" and from the terminology that seems to mean something like from collectivism to individualism or perhaps from socialism to capitalism. Folk like me who support both capitalism and civil liberties are therefore described as "right libertarians". 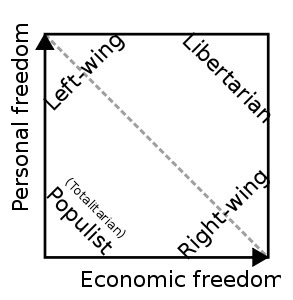 Here, we have a vertical "personal freedom" axis and a horizontal "economic freedom" one. The bad guys - communists and fascists - are in the bottom left corner and they appear in the top left corner on the first diagram. Traditional right-wingers (Tories perhaps?) who are somewhat in favour of capitalism but not too sound on civil liberties appear at the bottom right. Traditional left-wingers (Labour people perhaps?) who are somewhat in favour of civil liberties but not too sound on capitalism appear at the top left. On the first diagram the Tories would be on the top right and Labour on the bottom left although the relentless attack on civil liberties by Blair and Brown arguably pushes them into the top left box...

In this second diagram libertarians are placed at the top right corresponding to the bottom right box in the first diagram.

But this only seems straightforward.

The first diagram confusingly only uses the authoritarianism/libertarianism terminology along the social scale axis and uses quite different terminology (left/right) when dealing with the economic scale.

This is a fundamental error and one that gives rise to endless confusion.

So why is the view presented in the first diagram so prevalent?

The answer is that knowledge of economics is in such an abysmal state. Almost all British politicians, academics and journalists are in thrall to some form of Marxist or Keynesian nonsense that totally misunderstands the practical and moral case for economic liberty. In short, people need to spend a year or two reading their Mises, their Hayek and their Rothbard before they start writing about anything that's going on in the world. (*)

Cristian Vasquez
I believe that the "economic scale" axis in this diagram refers to the level of centralicity regarding the management of resources. On the left we have only one individual (i.e. state) that manages all, and on the far right, all individuals that manage their own money. In that axis the liberty or tolerance is not measured because its just the social configuration used to manage resources.

Guest
When South Korea and Taiwan were, in the 1960s, 70s and 80s, through neo - mercantilism, building their economies into the formidable machines we see today, that libertarian sine qua non, viz., democracy, was non - existent. The greatest rates of economic growth came about in the absence of both democracy and libertarian - style economic freedom vis - a - vis the citizenry of these two Asian Tigers.

I agree. An economically free society must respect a degree of civil liberties.

Whiskey Jim
Well, if I understand the first image correctly, the major problem with it is that it is impossible to have an 'authoritarian right' as defined by the constructs.  What is an economically free authoritarian state?  It does not exist.