It's always good fun to confront the bourgeois left. Explaining to the chap selling socialist literature on Princes Street that planned government spending was still going up caused a bit of a frisson. When I made the same point to one of the "anti-cuts" demonstrators a few weeks ago, I was accused of "being a journalist from the Daily Telegraph"! Where's my paycheque?

At the recent Political Innovation event, one session found a young chap - I think he was a LibDem - asking about the voting age. Should it, perhaps, be 16? Some agreed, and other ages were suggested. When I proposed that voting rights should only be given to net taxpayers no matter what their age, the room went a bit quiet. But no one actually disagreed. It's always good to sow the seeds of doubt in the heads of young statists. You never know where the next Rothbard will come from.

On to today. I had to visit the local post office on Libertarian Alliance business and then went along to the Haymarket Bar. The landlord was a bit concerned about the student demonstration that was shortly to arrive outside. He had received no prior notification from the authorities. I was standing beside some members of the traditional working class who were speculating about going into the plywood business... But our host wasn't worried about having his windows done in - this is Edinburgh after all. No, as he observed to me: "Students like a drink and I've only got three staff on this afternoon."

Here is a view of the Haymarket junction taken from inside the bar. The poppies are on a temporary site as the war memorial has been removed for the tram works. These "works" are taking longer than the Great War itself. The police are outside the Liberal Democrats' Scottish headquarters.

Here is the view after the arrival of the demonstrators. Fortunately perhaps, no one seemed to have noticed the Starbucks a few feet away. Actually, I suspect that quite a few of the "mob" were Starbucks customers...

At this point I had a lengthy debate with an "anarchist". I asked him why an anarchist wanted more government spending. Didn't he want to smash the state? Not yet apparently. Not while he was still at university. I made plenty of libertarian points to this chap and it was clear that his young followers were somewhat discomfited by seeing the boss anarchist being confronted by an older gent in a cloth cap. Especially by one who kept pointing out that he was a taxpayer. 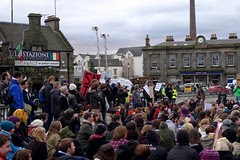 This chap was having his photo taken by his friends. Too late, he saw that he was also being photographed by a member of the taxpaying bourgeoisie. He quickly removed his balaclava and said to me: "Only a bit of a joke." He looked the sort to be a Writer to Queen Kate's Signet in twenty years time. He could call his firm Evil Lawyers LLP. That has a certain ring to it, does it not? 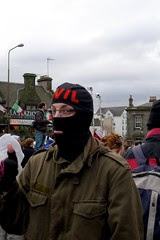 Here are the forces of law and order outside the Clegg building, which had been closed for the day.

I did have some sympathy for this protestor. Why should banks be bailed out if not students? Readers of this blog know the answer. 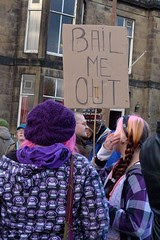 SEO Topics
I agree with your thoughts here and I really like your blog! I’ve bookmarked it so that I can come back & read more in the future.

james higham
Ah, those urban guerilla days, before we grew up.