The sheeple have spoken

And I had guessed correctly.

On Thursday I went on another little tour to test my new digital SLR. I headed west to Livingston, half expecting to get a world exclusive photograph of Mr Devine being strung up by an angry mob. Surely no one would vote Labour on the day that all the newspapers were full of the Walter Wolfgang affair. But I saw no sign of any revolutionary gatherings and, sadly, Livingston (and Cathcart) voted Labour yet again. Eventually I ended up at New Lanark, which seemed much larger than I remember from my previous visit many years ago. 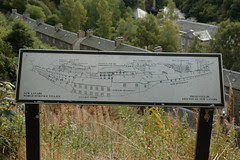 The quality of conservation at the site is extremely impressive: 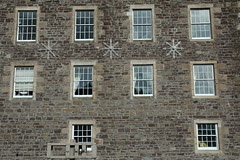 David Dale and Robert Owen created something at New Lanark that was widely admired in the Labour movement but I think that those gentlemen would have been shocked and outraged had they been able to see the party rally in Brighton.

Some time ago I said that the British police had become "the paramilitary wing of the Guardian newspaper". I meant that they were more interested in imposing political correctness than in catching actual criminals. Now it's far worse. The police increasingly look like the paramilitary wing of the Labour party. God help us all: Europe has seen this sort of thing before.

Triticale
Those stars are the loveliest tie rod plates I've ever seen.

The Pedant-General in Ordinary
"Owen's workers were free 'to quit his service', but 'while they remain in it they are as much under his absolute management as so many negro slaves'"

Gaaahhh!!!! That is not a "but". It is the crucial thing that differentiates freedom from slavery.

Now what does that little contradiction remind you of?

pjalbin
Speaking of New Lanark and the Labour Party, in "Upper Clydesdale: A History and Guide" Danial Martin writes: "Many of the visitors were favourably impressed but others, notably the poet Robert Southey, were not taken in by Owen's socialistic benevolence but discerned a hard authoritarianism underneath. After having been shown around the place by Owen himself in 1819, Southey concluded the 'Owen in reality deceives himself' and that his factory and colony differed 'more in accidents than in essence from a [slave] plantation'. Owen's workers were free 'to quit his service', but 'while they remain in it they are as much under his absolute management as so many negro slaves', Southey asserted that Owen would not admit even to himself that 'his system instead of aiming at absolute freedom can only be kept in play by absolute powers'. He regarded Owen as a benevolent despot."