Back in olden times we pupils of Prestwick High School and then Ayr Academy used to go on the annual "school trip" sometime in June. Usually this involved going by train to Gourock, Wemyss Bay or Balloch from where we would undertake a cruise "doon the watter" or on Loch Lomond.

One year we went as far as Keswick. I'd been many times before as my paternal grandparents lived in the area. I felt quite the teenage cosmopolitan as very few others had been to the Lake District previously and for several pupils it was their first visit to England!

A family birthday took us back to the Lakes this weekend.

We started by taking the Lakeside and Haverthwaite Railway up to the southern end of Windermere: 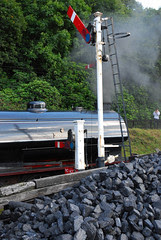 Then we sailed the MV Teal from Lakeside up Windermere to Bowness and on to Ambleside: 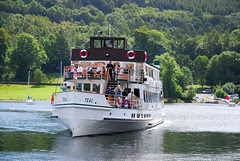 We enjoyed a nice view of the Langdale range: 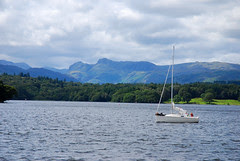 Things had changed since the days of the "school trip". As well as assorted Brits, I noticed Americans, Japanese, Mexicans, Italians as well as this group of Indians who were enjoying an onboard picnic: 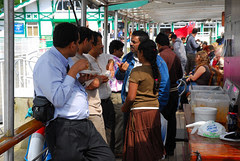 Coincidentally, a group of English girls were studying a travel guide to India.

The rest of the Indians stood at the bow: 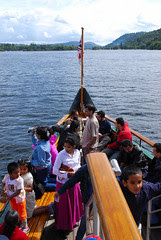 while some Muslims were at the stern: 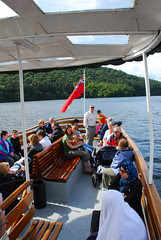 Back ashore I noticed evidence of some of the Lake District's main languages: 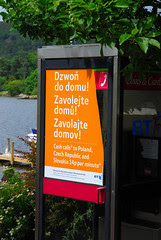 At the end of the day I was pleased to see this reminder of those Ayrshire school trips of old: 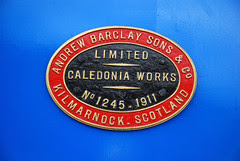 (Other photos are here.)

Ah, yes. I believe that the Cote d'Annan is especially fine this year.

dearieme
Some of us grew up in low-lying, fertile, leafy, sun-bathed Scotland, looking over the Solway at mountainous, driech, windswept, rain-drenched, snow-capped, thin-soiled England.

David Davis
It's very nice to see what you saw. if only Die Pluralgemeinakulturensschaftspolitzei would just shut up, pack up their offices into bin-liners, shred their "records", mallet their hard disks and bin the shards, go home and grow pot in Wales or wherever they want to, and use chicken-shit for electricity, and all that sort of thing, then we would all be happy. The Moslems in the back would leave the Indians alone in the front, the English drinking amidships would ignore both lots cos' we could then afford to, and everyone could have a happy day out.

Oh and by the way, i think the Czech translation on that notice was spelt wrongly. It's the middle one, and Zavolejte should be spelt Zavoleite, as there is no letter J in Czech, only in Slovak.

Oh yes, the BT poster - we have those on 'phone kiosks up here, too. Also signs in our local post office. I often hear Eastern European languages (the only ones I recognise are Polish and Czech) whilst walking rounf the main Tesco in Inverness - yesterday I noticed 3 or 4 separate groups whilst I was doing some shopping there. At least one CAN get a plumber, etc., now