I've been in Glasgow three times over the past fortnight. I like the city. It's sad therefore to read this:

Glasgow is home to the most workless households in the UK, according to the Office for National Statistics, (ONS).

From reading certain southern blogs I know that some will say: "Well, that's Scotland for you. Load of welfare bums, aren't they?"

However, Scotland as a whole had the highest employment rate of any UK nation, at 76%.

And no we don't all work for the state, as I explained here.

There's a particular employment problem in parts of Scotland, especially in Glasgow. I don't normally support tax regimes being varied in different parts of the country but I can't help wondering what would happen if corporation tax and national insurance were to be abolished in the east end of Glasgow. I might even relocate my own company: I had to pay £0.38P corporation tax a couple of years ago...

And Glasgow's surrounded by the UK's best scenery: 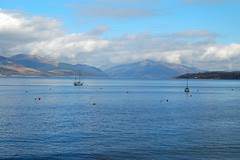 Political Dissuasion
"And Glasgow's surrounded by the UK's best scenery" - you mean the rest of Scotland.

As an original Weegie, there are parts where a culture of 'cannae be arsed' is applied to getting a job. The Easterhouses, the Gorbals', the Pollocks, these are the places which create the statistic (unlike the West End for example), and these are not the places you'd want to move your business.

Jonny Newton
I used to have a tie (which has gone AWOL now) which had a picture of a rising sun with the slogan:
"Glasgow's East End - the brighter side of town". It was a relic from East End Executive - a project from the early 90s that my father worked on.

David Farrer
Got me there. What I should have said is that the City Council should encourage the residents to be more work-friendly!

vavatch
I dunno - is glasgow city much more business hostile than neighbouring areas? The investment bank I work for seems to be content to have a huge outfit in glasgow city - most of the people who work there however do not live in glasgow city.

Most of the business is in glasgow already. But the workers are elsewhere.

But the solution isn't the one loved by Glasgow's ZNL councillors - the incorporation of those wealthy suburbs into the city - but rather the adoption of business-friendly policies in Glasgow itself.

vavatch
Glasgow is a difficult case because it has been gerrymandered so enormously. If anywhere is remotely wealthy and well to do then it gets hived off to a neighbouring city council leaving only a poor core. So glasgow city (the council areas to which the stats pertain) is less than half the population of the overall metropolitan area - strangely places like newton mearns and bishopbriggs and milngavie and uddingston and so on all manage to stay in lower tax neighbouring councils even tho most of them are really just commuting dormitories of glasgow and contiguous with it.

And in fact many of those areas have some of the wealthiest districts in the UK - and certainly in scotland.

So when people tlak about glasgow stats, it is really inner city glasgow. Sort of like if you took edinburgh and put morningside and whatever into different councils but making sure to keep the seedy parts of town in Edinburgh City.

runescape accounts
I like your articles, you have a great writing style!

subrosa
I agree with you it's sad to hear Glasgow spoken about so negatively but I suppose stats are stats. Do wish reporters would give the size of Glasgow as one of the biggest cities in the UK and the biggest in Scotland. Lots of southerners don't know that. Perhaps that would put the stats into a balance of sorts. Plus of course, they never mention the asylum seekers Glasgow Council decided to bring to the city en mass.