All of which suggests that the £100,000-a-year figure being bandied about is bogus. In fact, for the Chancellor to balance his books, we are beginning to look at nearer £50,000-£60,000 being the point where a new 50 per cent band kicks in. You have been warned.

As well as the UK, the rest of the EU and the US face trouble too.

Have a look at this chart: 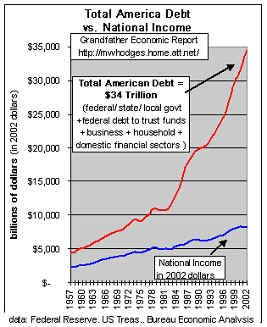 The Financial Sense Online website writes about the US:

Are we really broke? The answer is clearly, YES, but living on borrowed time and money. A recent study was done by Jagadeesh Gokhale and Kent Smetters which measures our government’s current debts and projected debts based on the proposed federal budget and revenues for 2004. By extending the numbers in constant 2003 dollars, they have come to the conclusion that the Federal government is officially insolvent to the tune of $44 trillion.

On the FSO's weekly broadcast we were told that both Medicare and Social Security would be bankrupt by 2010 or 2011 unless income tax is raised by two thirds!

The truth is that the welfare state is bankrupt and almost no one, not the Scotsman editorial writer and certainly not the Tories, is willing to say that the Emperor has no clothes.