A RENOWNED kiltmaker is threatening to sue City of Edinburgh Council after it confiscated his sandwich boards from the Royal Mile. The boards were removed in the latest phase of a controversial crackdown on street advertising which has incensed traders.

Mr Nicholsby’s solicitor, Chris Leach, said: "We have sent a fax to the council with a deadline for the boards’ return. Mr Nicholsby has used these boards for 25 years and is very angry about the council’s actions. Our view is that the council has not satisfied the requirements of the Road Scotland Act." Two other traders had their boards removed on Thursday by officers taking part in enforcement action against shops flouting new council rules.

Being a moderate sort of chap I demand the immediate privatisation of the Royal Mile so as these conflicts can be avoided by the sound application of property rights. Come to think of it, shouldn't a "Royal" Mile already belong to Her Majesty? I'm sure that she would tolerate advertisements for kilts.

As it happens, I was on the Royal Mile yesterday and took this photograph: 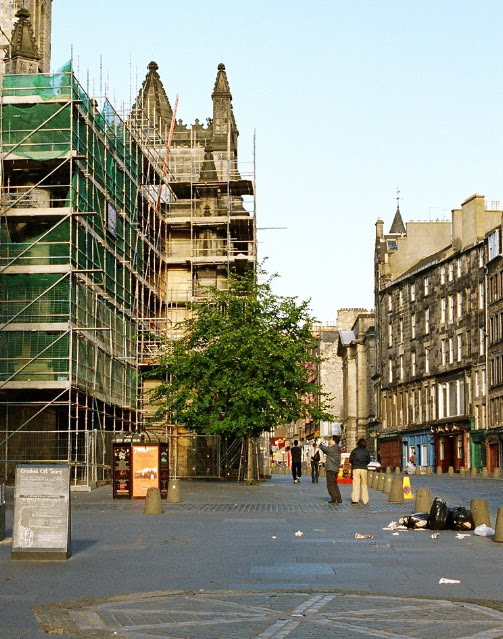 Unless I am very much mistaken, it looks as if the filthy capitalist advertising board is causing no trouble at all but that the wonderful People's Republic of Edinburgh street cleaning department is "out at lunch".

Why can't the City of Edinburgh stop harassing tax-paying entrepreneurs like Mr Nicholsby and concentrate on keeping the pavements clean?