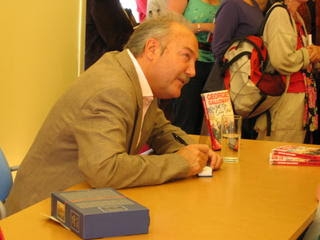 A couple of weeks ago Andrew Neil wrote about the Scottish Raj, that group of state-educated Scots who have come to dominate so many British institutions:

Andrew Neil says the English should stop worrying about the invading Jocks: the northern grip on the nation’s politics, media and business is being irrevocably weakened by the dumbing down of the Scottish education system

George Galloway may not be a paid-up member of the inner circle of the Raj but he is a wonderful example of the benefits of the old system of Scots education that's been destroyed by his erstwhile colleagues. Of course, I’m thinking of his mastery of words, not his politics. George Galloway was undoubtedly the best speaker at the twenty-one events that I have attended at the Book Festival. Speaking for an hour without notes he told us that he had now addressed 1,995 public meetings since 9/11, and it showed. But what about the content of his speech? Ah, there’s the rub.

Some things I agreed with: Scottish Labour MPs are “a miserable sheep-like herd” and Parliament as a whole is “a toxic bubble of arrogance.” He told us that he saw running along the parliamentary benches “a shiver looking for a spine to run up.” A few of us knew that Galloway wasn’t the first to use that phrase, but it got the desired applause. We were told that Tony Blair was taking away our traditional liberties (true), but Galloway simultaneously supported the Left Alliance - mainly ex-Communists - in the forthcoming German election.

Galloway strongly opposed Scottish nationalism and did so far more impressively than any Labour or Tory voices that I have heard. "People in Newcastle and Liverpool aren't foreigners," he shouted. He dealt resolutely with a heckler who accused him of exhibiting the “Scottish cringe”. A big majority of the predominately Scottish audience supported Galloway on the independence question.

He thought that Kenneth Clarke would be the best choice for Tory leader as none of the others would adequately oppose Blair, but this was without any mention of the EU. On ID cards, Galloway gave us a good quote: “People trust Top Shop more than they trust the Top Men.” This was in answer to the suggestion that private companies issue so many cards that we shouldn’t worry about a government one. The audience seemed to be largely anti-ID cards.

Unsurprisingly, Galloway completely failed to understand the link between personal and economic freedoms. The people of poverty-stricken Tanzania had “rightly risen up against water privatisation”. No mention of course of that country’s history of socialist mismanagement that created the poverty, nor of the disaster of Scotland’s continuing water nationalisation.

Mr Galloway remains an unreconstructed collectivist - “Some people are poor because others are rich.” How many times have we heard that? And how many times does it need to be disproved?

As I left I turned to my neighbour and said: “Great speaker, but wrong in so many ways.” “You’re probably right,” was the reply. And I think I am.

Aye it those fuckin celtic genes which dae that mon!

Devil's Kitchen
I hear that Tony Benn is qa very good speaker too; it doesn't stop him being absolutely wrong on everything that he's ever expressed an opinion on. He was even anti the EEC (right stance) for the wrong reasons.

GG is the same. Except that he also urges on homocide bombers. Never forget that Galloway is a mutilation and murder condoning turd, who likes nothing better than saluting a bit of indefatigability.

As for this whole Scots/English divide, that's rubbish as well. As an Englishman living in Scotland for the last decade, I can tell you that there are only two differences between the two races (and genetically, neither exist as a race); the Scots drink more and swear more. Neither are attractive traits.

When accusing him of being enmeshed in moslem causes it is worth noting that he was one of the very few who opposed bombing hospitals to help Moslem terrorists engage in genocide in Kosovo.

Indeed he said that if Yugoslavia was to be divided it should be divided on ethnic lines rather than to provide lebensrum for Nazis & fundamentalists . I don't think anyone to the left of Adolf or Blair could call that extreme.

One more Black Mark against Ken.

Hector Maclean
"An MSP would never be found addressing the Scottish Parliament."

This really isnae my night. The above should actually read "An MSP would never be found addressing the American Senate".

Of course an MSP would address the Scottish Parliament.

Shame your board disney allow for errors to be corrected.


Hector Maclean
Spot the mistake in paragraphy 3! - should read "it is the former he is interested in".

The Andrew Neil thing was quite interesting too, and in my opinion correct.

However, and I was surprised at this, the unreconstructed left winger (and all round statist champion) Muriel Gray wrote an article in the Sunday Herald agreeing - albeit reluctantly - with Neil:

Hector Maclean
"Galloway strongly opposed Scottish nationalism and did so far more impressively than any Labour or Tory voices that I have heard. "People in Newcastle and Liverpool aren't foreigners,""

Frankly - as a Scot - I feel Dubliners are not foreigners, we are in many ways (culturally and socially) much closer to them that to our English brethren. Yet Dubliners and Irishmen are de facto foreigners. Galloway's argument doesn't really hold water.

While I would not regard Galloway of having a 'cringe' of any description, it is clear that when it comes to Westminster V Holyrood it is the latter he is interested in. Galloway would not waste his time in the wee pretend Parliament that the wider world doesn't give a tinkers cuss for. An MSP would never be found addressing the Scottish Parliament.

It is Galloway's preference for playing on the big stage of Westminster that is likely behind his 'Scoucers arnie foreigners ye ken' stance.

Alex
Amazing how Galloway has made such an about-turn on the cause of independence. Immediately after the 1992 election, I well recall his plea to Scots to become a "black-shirted mass" (I kid you not - he wore one as he spoke), to give John Major as "uncomfortable a summer as has ever been", if the then PM continued to deny Scotland's right to self-determination.

Of course, this was before he became so enmeshed in Arab causes, and before Shiaas and Kurds began to pose awkward questions of his Iraqi commitment. It was also before he was championed (and paid?) by the Socialist Workers' Party, as vehement an opponent of Scottish independence as has ever been.

It sounds like the usual Galloway turned up: Full of rage, bluster and articulacy, with a gift for paraphrase and cheap soundbites. With all the integrity and honesty of a devout adherent of the strictest double standards.