Last Saturday I took a railway trip to Annan, the town of my birth. Indeed, I went for a little stroll to 32 Port Street, in which house I made my very first appearance. Unaccountably, the blue plaque seems to have been taken away for renovation... 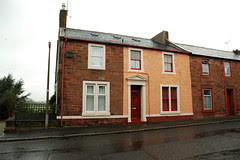 Sometimes though, travelling by train is anything but relaxing:

Linda Groves (56), of Whitfield, was a passenger on the 13.07 train from Carlisle to Glasgow Central at the end of September when she was physically and verbally attacked by the man.

Especially upsetting for Ms Groves was this:

To her disbelief, while the onslaught continued, train staff stood and watched the man attack Ms Groves and did nothing to assist her.

She has written a letter of complaint to First ScotRail and the reply from the firm stated that they advise staff not to put themselves in any danger.

“Passenger safety is our top priority. We would like to apologise to Ms Groves for what was obviously a distressing experience for her,” said the spokeswoman.

So which is it? If passenger safety is the "first priority" surely railway staff should come to the aid of a passenger under attack. I expect that First ScotRail has told its staff to turn a blind eye to this sort of thing for fear of legal consequences in the event of one of their employees being injured. If that's the case please cut out the PR-speak about passenger safety being the first priority.

Of course, a lot of these problems would be solved if the police actually went out catching criminals instead of canvassing for the ZaNu-Lab party.

Linda Groves
Yes. it's linda from the train. Many thanks for reporting what happend during my journey. Had Scotrail not sold this man the drink in the first place I think I would have had a safe journey. The police tried to find this man but, the CCTV at Glasgow were not working properly on that infamous day. I still travel on the trains and will stick up for myself should it occur again.

dearieme
Eric it was. I wish I had my father's war diary but I don't suppose he kept one; too much danger of capture, perhaps. He didn't like talking about it all; seeing your friends killed, and killing blameless German youths, was not his idea of fun. He went in on (if memory serves) D+6 or thereabouts.

David Farrer
That would be my (late) uncle Eric.

Click here (and scroll down) for his D Day diary. He was there treating mouth wounds.

dearieme
On reflection, if your grandfather had a son who carried on the practice, then it might have been your uncle who received the negative reinforcement from my kid sis. But it was certainly Dykes the Dentist.

dearieme
Great x n- grandfather was the Provost who paved the streets of Annan. My sister pushed a dental drill through your grandfather's thumb-nail. I was a Community Leader: sometime Senior Sixer in the 1st Annan/3rd Dumfriesshire Wolf Cubs. From the area, indeed!

David Farrer
Correct. Mrs Ballantyne was the midwife and was a friend of my maternal grandparents. My grandfather was Thomas Dykes, Provost of Annan and a local dentist.

Are you from the area?

dearieme
Is that the old Nursing Home in Port St., a few doors down from Scaurbank?