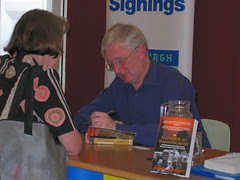 Craig Murray
Originally uploaded by David Farrer
I forgot to write about my final event at the Book Festival.

Craig Murray was British ambassador in Uzbekistan until he fell out with the Foreign Office over his criticism of the Uzbek regime.

We heard some interesting stories. Like when Murray was offered the position of high commissioner in Malawi but turned it down as not being a good career move. Apparently the salary on offer was half that being "earned" by the new commissioner, who also may get a peerage. Now, why could that be?

Then we heard of Murray's visit to Buckingham Palace where he got better advice about his new posting from Princess Anne - who knew Uzbekistan from her Save the Children work - than anything offered by the Foreign Office.

Quite different from Jack Straw's message to Murray at the end of his ten-minute send-off chat:

"Well, when you get to wherever it is you're going, tell them that I'm often thinking about them"