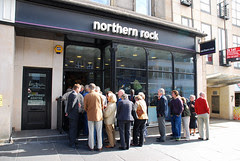 Capitalism is not as stable and self-sustaining as it seems. It needs the state to step in sometimes to protect it.

On the contrary, we are seeing a crisis of socialism. The entire monetary system is the creation of politics with money being produced out of thin air. A capitalist monetary system would be based on real assets and not on a witch's brew of paper and bytes. Just because many of the beneficiaries of the fiat monetary system are rich and powerful doesn't make it capitalist. As always, the poor suffer most from socialism and its inevitable breakdowns.
Posted by David Farrer at 17:14

James Higham
It's the srisis created by the financial cabals, which are politically socialist and socially oligarchical.

knirirr
This article may be of interest:
http://www.anti-state.com/article.php?article_id=416
An acquaintance of mine, who happens to be leader of the Money Reform Party (http://www.moneyreformparty.org.uk/) would be more in agreement with your comments on "thin air", which the first article would seem to me to refute.

Martin
"Just because many of the beneficiaries of the fiat monetary system are rich and powerful doesn't make it capitalist. "

Are you quite sure that immediately after the United Kingdom suffering a bank run is the right time to be discussing the nature of capitalism?

Bill (Scotland)
A capitalist monetary system would be based on real assets and not on a witch's brew of paper and bytes.

??? I think this is a bit of an exagerration. It would hardly be possible to run a modern society, whether 'capitalist' or 'soclialist' without the use of 'paper and bytes'; promissory notes and bills of exchange go back a lot further than modern ideas of 'socialism'. Any financial system has to be based on trust; when that breaks down (as it has in the last couple of days, at least partially) then few systems can withstand the maelstrom that follows. I had been going to write a post today about Northern Rock (in which I happen to be a small shareholder) and another financial institution where I have a more important connection, but I thought better of it; this is not the time to be undermining a system upon which most of us depend, in one way or another.

Whether Northern Rock should have increased its lending so much recently (by more than 50 percent in the first six months of this year, from what I've heard), largely on the basis of interbank funding (and some its more exotic derivatives), as its own deposit base is relatively small in comparison, is questionnable perhaps. Whether the BoE should have agreed to support it is perhaps less questionnable, unless you wish the whole economy to switch back to barter. The gold standard whilst based on a finite resource was based on a commodity with little intrinsic value even if it is widely-used in electronics, etc., but whose main value otherwise is as decoration. Personally I have no wish to return to a society based on pre-16th century Florentine banking priciples, which is basically what we have today.