I favour private ownership of roads and that implies that we have some sort of road pricing regime. Originally I had an open mind on Edinburgh's proposed introduction of tolls but have come to believe that the Labour proposal is merely a tax-raising device.

I can't vote in the referendum and I'm rather upset about that. Because it's not an official election the full electoral roll isn't being used: those who had ticked off the "privacy" box on the annual electoral form can't vote without making a special application to the city council. When I read about this I e-mailed the council and they eventually sent back an application form that reached me on the day after it had to be returned!

Looking around the city I have noticed many pro-toll posters that have been placed illegally:

PRO-TOLL campaigners were ordered last night to take down thousands of posters put up across the city at the weekend after the city council ruled they were illegal.

The illegal pro-council posters have not been removed. I have yet to see any pro-toll adverts on private property. Here's one of the illegal posters: 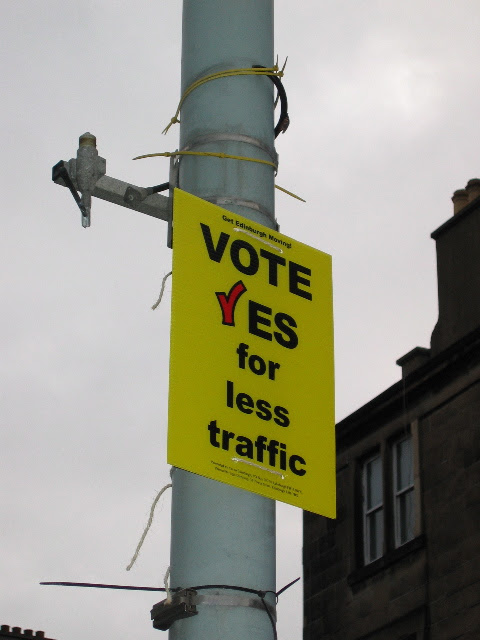 On the other hand, a walk around the northern New Town and into Stockbridge revealed many anti-toll posters on the windows of flats and probably on the majority of small businesses. Here's one of them: 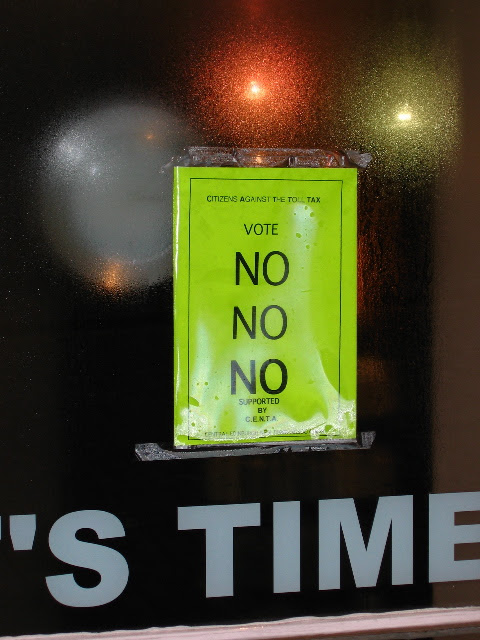 In a battle in which one side uses illegal, tax-funded posters and an opposition that appears to have the backing of private property owners and small businesses, I know which one gets my support.

Paul Lewis
You have to laugh at their brazen brass neck.

"A 'Yes' vote is a vote for the preferred strategy."

Vote 'NO' and we will interpret that as a legitimate mandate to spend shedloads of your money on futile and annoying "safety" initiatives.

Vote 'Yes' and we will interpret that as a legitimate mandate to spend shedloads of your money on futile and annoying "safety" initiatives, and charge you for driving in the City centre too.

Practically a definition of a straw man, isn't it?

Andrew Ian Dodge
David, I am surprised they can get away with that kind of behaviour.

Neil Craig
The newspaper poll suggests the council are going to lose big.

David Farrer
Ticking the privacy box on the electoral roll form means that your name is kept off lists of voters that are sold to mail order companies and the like. That rule also applies to the council itself unless it is running a statutory election such as for council or parliamentary seats. The tolls referendum is advisory only and not authorised by parliament (Scottish or Westminster) hence the city council isn't allowed to use the full electoral roll. Very odd, I agree.

Patrick Crozier
Why does ticking a privacy blog mean you should be disenfranchised?

dearieme
About the "yes" poster: if tolls are introduced but you still don't get "less traffic", do you get a refund?

Street postering is the biggest waste of time and money in any campaign. The only thing it does is get right up peoples noses.

Both sides should reach a gentleman's agreement not to employ this electioneering tool.