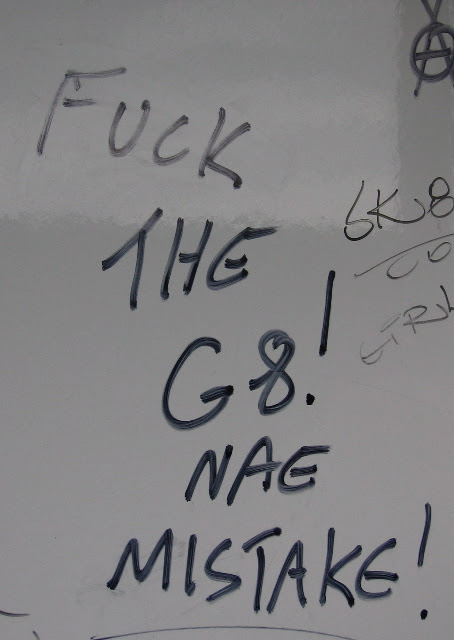 Glottal stop - not on your life. But always "can" until moved south.

Now there is a Freudian slip, if ever I mis-wrote one!

Stuart Dickson
More to the point, what did you say?

I tended towards the glottal stop pronounciation. In fact, after counting from 5-10 a few times, I find that there still survives a bit of a glottal stop. How reassuring.

But as an Edinburgh private schoolboy I'm sure that the full pronounciation of the "t" was encouraged at school.

I can still remember being told-off a hundred times for saying: "Can I go to the toilet?" English Standard English stipulates the use of "may" in such circumstances, but most Scots stubbornly stick to "can". For a very brief intro to the subject see Wikipedia's Scottish Satandard English entry:

Neil Craig
The first Norwegian dictionary was published after they separated from Sweden so that they would know the "correct" way not to be talking Swedish.

"A language is a dialect with it's own army" which is one reason I oppose separation.

dearieme
Either really. I can remember my playground 1 to 4, 7 and 11 & 12 but I'm damned if I can remember 8. PERHAPS 5, 6, 9 & 10 = standard Scottish English (supposing that there is such a thing), but what did we say for 8? I don't think it was just "eight" but it certainly wasn't "echt", because I can remember my surprise when I first heard it. More to the point, what did you say? No political agenda, just a curiosity/nostalgia thing.

I did not realise from your posting that it was my usage of the word "correct" that was upsetting you.

I actually switched to using "standard" quite inadvertantly.

Of course, in this context "standard" is the correct term, not "correct". How wise you are. Although you could make your points a little less obscurely.

Anyway, no more volunteers for "eight" then?

Are you looking for regional/historical variations on the English word "eight" or the Scots word "echt"?


dearieme
Ah ha, backed off from "correct" to "standard translation". What next? "Favoured in Edinburgh ruling circles in the sixteenth century?"
Anyway, no more volunteers for "eight" then?

Stuart Dickson
Why should there be one unique way of spelling the English word "eight"?

... and Dictionar o the Scots Leid:

Yes, the Scots word "twa" is the standard translation of the English "two". "Twy" may be a regional variation. Look it up and educate yourself.

dearieme
"the correct Scots translation"? Says who? And why would there be a unique one anyway? You'll be telling me next that the correct Scots for two is "twa", but it was "twy" in my playground.

Stuart Dickson
Echt is the correct Scots translation of the English word eight. The "ch" is pronounced as in "loch". I am delighted to hear that our indigenous language still survives in the Stewartry.

However, it still doesn't rhyme with mistake!

The "8" of "G8" is probably pronounced with a glottal stop in this example, as is the wont of many urban Scots, especially males.

However, even that doesn't rhyme with mistake.

Maybe it's not meant to rhyme. It is actually a powerful, poetic statement without a rhyme.

dearieme
Does this loon suppose 8 rhymes with mistake? Come to that, how did you pronounce 8 when you were a wee laddie in the playground? I've heard "echt" in The Stewartry.