"No man's life, liberty, or property are safe while the legislature is in session."

I'm not sure about the ladies, but we Scotsmen are safe this week. The Edinburgh Parliament: 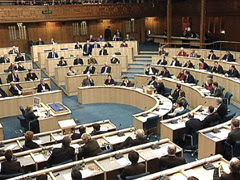 has "left the building" and given it back to its owners, the Church of Scotland.

Yes, it's the week of the Kirk's General Assembly:

The Kirk has never quite got its collective head around the money question, although it's worth noting that its period of greatest influence was when Scotland enjoyed a more-or-less free market economy.

On Wednesday, the Assembly heard of a way to make money:

QUESTIONS were raised yesterday over whether the Church should sell advertising space on its website.

The General Assembly of the Church of Scotland heard that the Kirk’s communications board is considering the plan as part of efforts to balance its budget.

Sounds good to me. But, of course, there was controversy. It's OK for the Kirk to have money, but earning it?

"The board mentions very briefly in its report that it is considering the commercial potential of selling advertising space on the website to help meet its budgetary shortfall," he said.

"This, I feel, is a major development or departure of principle and content from the present agreed format of the Church’s website.

"But I believe it will also need to determine on what pages it would be appropriate to place any advertisements."

Dr Wyllie went on to question whether such advertisements should be from building societies or from financial services companies.

Does the Kirk keep its own money under the Moderator's bed? That would explain why it's running a bit short of cash. More likely, its diminishing funds are kept in a - pause for shocking word - bank. In fact, they're probably invested with one of Edinburgh's large financial institutions that make this such a prosperous city and which employ many of the Kirk's own members. So why not make money by letting financial services companies advertise on the Church's own website?

I rather suspect that the Kirk hasn't yet got over the events of May 1988 when a certain Mrs Thatcher addressed the General Assembly:

This landmark defence of free market capitalism from a Christian perspective was remarkable not only in that it came from the leader of the United Kingdom. It was further astounding to see a woman sermonising to the gathered patriarchy of left-wing ecclesiocracy in Scotland. A memorable sight to all concerned.

It's time for the Kirk to "move on" and recognise that capitalism and religion can go together. Put those ads on the website. A Scottish Church should be known for financial and religious soundness.
Posted by David Farrer at 10:06

Neil (195.93.32.7)
The Church of Scotland will have a progressive relationship with anybody.

Recently I had an email argument with the Moderator Professor Torrance of Aberdeen U. He had said in a sermon to Glasgow's Catholic (& therefore pro-Croatian Nazi) Cathedral that the Serbs had, from his knowledge, put people through sawmills. Eventually he admitted that it he didn't know it personally but assured me he had got it from an "unimpeachable" but unnamed source but would remove it from the website.

There was a time when the church had only one unimpeachable source 7 he wasn't a fan of Hitler.

David (81.131.242.78)
It has often been pointed out that while the content of Mrs Thatchers speech upset the Presbyterians in 1988, if it had been delivered a couple of decades earlier they would have found nothing to disagree with in it.

Sadly the Kirk has fallen for most of the socialist shibboleths that blight modern Scotland. The idea of people being responsible for their own lives and actions was once pretty much taken for granted, now its all the fault of society, and we should not be nasty to neds etc.

Half Canadian (205.187.217.49)
It all depends on the market. "Barely Teen Girls?" No, for obvious reasons. Amazon.com? For books of a theological nature, why not? Skills training? Absolutely.