The crowd of anarchists (sic) gathered at the West End at noon and proceeded along Shandwick Place towards Haymarket. They paused outside Starbucks for about 10 minutes and then turned left, past the West End Police Station (protected by mounted police!), and then went up Torphichen Street and into Canning Street. When I left there an hour ago the anarchists were trapped in the narrow Canning Street by a vast number of police - local and from Manchester, Merseyside and West Yorkshire. The riot police are now at the western end of Canning Street.

A young lad wanted to get back into Exchange Tower but was stopped by the police. He got out his mobile to call the boss. The policeman told him to tell the boss that: "Constable Atkinson from Merseyside says that the lad is having a long lunch hour and deserves a rise!"

There's a constant helicopter presence overhead and the never-ending sound of police sirens. 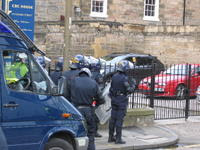 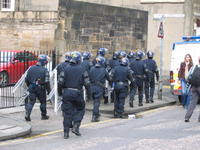