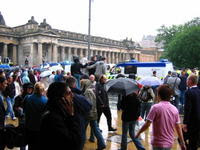 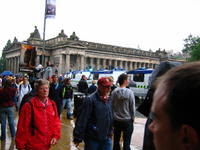 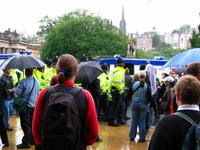 Cuthhyra
Ragnar, the problems with your arguments for socialist economics are way to big to go through in a blog comment, that is why I suggested The Road to Sefdom. In a nutshell it is not so much that the ideals of socialism are immoral, but rather that the practically implementation of socialism INEVITABLY leads to totalitarian dictatorships. You are talking about a dictator for your 'republican' party - one person with absolute, limitless control over the life of millions! It is horrific and abhorrent and a world government even more so. National trade unions would develop into monopolistic dictatorships themselves, holding the desires of the workers over and above any needs of the customers. The crumbs thrown to 'small businesses' hardly helps, when does a small business become a big business and get taken over by state lackys? Doesn't the fact that 'unfortunate events' occur in every instance where full state socialism has been tried even make you pause for thought?

I really hope you will read some authors such as Hayek, Friedman, Rothbard and Popper, they could more fully explain the principles of liberty than I can here.

Ragnar Danashold
Communism: A moneyless, classless, democratic state.
Fascism: An Oligarchal or Dictorial government, where all labor goes to the state.

As such, Stalin and his followers were Fascist.

You know, Socialists are not the polar opposites of Libertarians. Oh sure, economicly we're on each end of the spectrum. But we tend to be socially Liberal or Libertarian. Populasts (Socially Conservative, Economicly Liberal, pro-Big Government) are your rivals.

I assume you mean men like Pol Pot, Joe Stalin, and Mao Ze Dung? Well, you'd be right, if they were Socialist.

But Socialism, by defonition, is a democratic control of the economy. Tell me, how much democracy was in Stalin's Soviet Union? Answer: NONE! Thus, it cannot be Socialist.

David Farrer
I link to all of the parties that are represented in the Scottish parliament. That doesn't imply any support.

I link to LGF because they perform a useful function in exposing the UNSPEAKABLE ANIMALS who have murdered dozens of my fellow citizens today.

By the way, if you were to read a bit more widely you'd discover pretty quickly that socialism in its various guises is responsible for the deaths of over 100 million of our fellow human beings.

Ragnar Danashold
My heart goes out to the people of GB, and especially to the families of the victims.

Ragnar Danashold
Hey, what's this I hear about a bomb in London?

Ragnar Danashold
By the way, David, why do you have links to Little Green Footballs, Labour, Socialist Parties? Being a Libertarian, I thought you'd be diametricly against these orginizations.

And please, pardon my spelling. I was in a hurry, and I'm not very good to begin with.

Ragnar Danashold
"Ragnar, why would you want to be an economic socialist? I recommend reading F A Hayek's 'Road to Serfdom', which is one of the most clear extrapolations of where socialist economics leads and it isn't a pretty place!"

I don't mean Soviet-style Oligarchy, where the government controls the entire economy. A truly Socialist economy consists of direct democratic control over major industries, a single nation-wide Union of Workers, and a Strong small-business Free Market.

"not bothered about inconsistency, then?"

I'm not being inconsistant.

Socially Libertarian: I support an indeviduals right to do what they want to do, without the government saying, "it's immoral." I support total religious and political freedom, gay rights, abortion rights, drug legalization, and the right to own and bear firearms. I am against state legislation for political correctness or moral behavior.

Economicly Socialist: I support the afore-mentioned economy. I feel that it provides a more egalitarian system and a better deal for the workers.

Internationally Globalist: I support a Worldwide Republic; a Confederation of Independant Nations, united under one flag, one government. With this government, situations like the hurricanes and tsunami last year would be handled more effeciantly.

Politically Uni-Party Republican: This government was the one ment to be put in place in Russia, Vietnam, and Cuba, but, due to unfortunate events, it did not. One party, lets say the Bolshevik party, has total control over the executive branch of the federal government. The party leadership picks a leader, he serves a lifetime appointment. However, there is a multipartisan congress, an independant court, democratic local governments, and a generally elected Prime Minister to make sure the party doesn't become an oligarchy.

"My understanding is that socialism REQUIRES inconsistency..."

What led you to this conclusion, PGO?

The Pedant-General in Ordinary
dearieme, I don't think any socialist is worried about inconsistency, almost by definition.

My understanding is that socialism REQUIRES inconsistency...

cuthhyra
Ragnar, why would you want to be an economic socialist? I recommend reading F A Hayek's 'Road to Serfdom', which is one of the most clear extrapolations of where socialist economics leads and it isn't a pretty place!

Ragnar Danashold
Don't know if you got this, so here it is again.

I am interested in finding a good Libertarian blog to debate on. Despite my blogname (derived from Ayn Rands "Atlas Shrugged"), I am a Socialist. To be specific, a Trotskyist. To be even more specific, I'm: Socially Libertarian; Economicly Socialist; Internationally Globalist; and Politically Uni-Party Republican.

It's hard to find a good place to really debate a Free-Marketeer. Hopefully, this'll be the spot.

Any questions on my ideology would be welcomed.