Although the line between social and economic freedom is very blurred, those on the side of the economic libertarian may seek to curb civil liberties for economic growth (the argument deployed by certain Asian Tiger economies in the 1990's) or have a relatively tight social control with free enterprise being promoted.

But of course I use the term "libertarian" to mean someone who consistently supports liberty, both economic and personal. That would exclude those Asian countries. The problem is that many are now pinching the L word just as they previously pinched "Liberal".

Although some have described this test as a bit simplistic, I think it serves as a very useful device for getting away from the tired old left-right, one-dimensional spectrum.

Nor surprise as to my score: 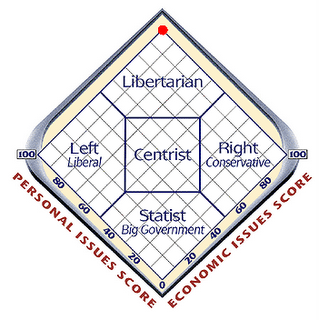 ("Liberal" is being used in the American sense here.)

viz
It seems that all parties are either ignoring or scared to face the problem if illegal immigration
in the United Kingdom. While most of undocumented immigrants are hiding and living in misery, J Reid and
L. Burn are pretending to be in control of the situation. This inertia is will only benefit scrupulous employers

So far we have been listening only to right wing parties and think tanks. That's the reason why I decided to
launch the survey at http://www.skillipedia.com to hear opinions from normal people. Once we get enough coverage
from the press we will be able to relay the result of the survey to the Home Office

You opinion is much appreciated

Wild Pegasus
I put "maybe" on the Social Security question, but only because the privatisation schemes I've seen all look like Wall Street welfare.

Me too. You kind of know when you're half way down!

Andrew Ian Dodge
There is always this one from the mainstream libertarian site on which I came up a "radical libertarian".

Mr Eugenides
I took this test and found myself slightly veering left of "true" north, due to answering "maybe" to the last two questions - do I favour replacing welfare with voluntary and charitable provision (yes, but not necessarily in absolutely all situations), and do I favour a 50% cut in the size of the state (in principle, yes, but I recognise that there would be big logistical problems in making this happen).

That it put me slightly on the left is distressing, but I suppose not surprising.

I'm not convinced by the graph, but agree that it serves a useful purpose. However, my impression is that there are very few self-avowed "left-wingers" who would ever describe themselves as libertarian, but the same is not true of those who claim to be on the right.


David Farrer
More on the above:

In "Antitrust Myths" DiLorenzo refutes "the story of how capitalism supposedly became monopolistic in the late nineteenth century, and how it was brought under control by antitrust regulation." Indeed, he considers "the whole story of antitrust" to be a myth. Rather than being monopolies that restricted output to drive up prices, the late-nineteenth-century trusts "were expanding production and dropping prices."

The Sherman Antitrust Act (1890) was in reality "designed to protect incompetent businesses from superior competition, not to protect consumers from monopoly." Why then did many businesses support the Sherman Act? The same reason that many corporations today support interventionist and anticapitalist policies: They wanted to use the power of government to hurt their competitors.

Yes, and that would move one down from true north towards northwest on the diagram. Needless to say numerous libertarians have argued that it's prior government interventions that bring forth calls for more interventions to cure the problem caused by the last one.

james higham
Another aspect is when one holds views which fall in the left-liberal camp but other views in the libertarian camp. then what about if one also believes governments should patrol anti-trust acts to enable the small businessman to operate? Isn't this statist?

Cleanthes
quite so, but the problem that we have to keep pointing out is that the "left"/"liberal" area is inherently unstable: as the curbs on economic freedom run completely counter to human nature (e.g. as it tries to deny that incentives matter), social freedom has to be gradually abandoned in order to preserve the economic (dis)order.

Either that, or the morons see the light, grant the economic freedoms and move toward Libertarianism...

Usually, its the former that happens, not the latter...