The shadow cabinet revealed its support ahead of next week's Commons vote on a bill to introduce compulsory ID.

By an exquisite piece of timing I shall be able to confront the leader of the Scottish Tories at a meeting that he will be addressing this evening.

Like many libertarians I have despaired of the Conservatives for so long but remained a reluctant voter in the absence of any alternative. No longer: I've joined the 1952 Committee. 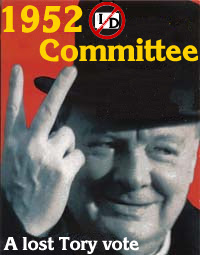 I'm gonna have to start using that spellchecker. Are you in the OED?

David Farrer
How about:

But it wouldn't be honest because it's spelled FARRER (with an "E")!

Stuart
Well, it would not get my vote.

If you do decide to stand could I request that you do not go down the dishonourable "Independent" route. It is the most dishonest label in politics, and there are plenty of examples, as you pointed out in a recent article.

At the very least you must include the word "libertarian", surely? Or are you too ashamed to profess your convictions?

-"libertarians are anti-politicians"
This of course explains why your wacky ideas never get implemented. If you are so "anti-politics" how do you explain away the actively campaigning Libertarian Party in the USA?

David Farrer
I should of course add that libertarians are anti-politicians.

David Farrer
How about one saying:

(Somewhere yesterday I read about an election-time sticker on the London Underground: "Use your cross wisely; crucify a politician!")

is unlikely to attract many crosses!

David Farrer
When can we expect the inaugural meeting of the Scottish Libertarian Party?

Stuart has used the L word without putting it in quotation marks. Is he coming round to the true faith?

rebbiker
The leftist indoctrinologists responsible for educating lemmings like Dickson usually require their dupes to be in nominal possession of the capacity for abstract thought.I stand four-square behind their decision to grant an obvious but necessary exception to this rule.

Stuart
Neil
If you are so opposed to ID cards why did you leave the LibDems, the only Unionist party to oppose them?

I would like to invite you to vote SNP, as the SNP and Plaid Cymru have been the most consistent opponents of the ID card scheme. But I realise that you do not support independence, so it begs the question: who are you going to vote for?

Stuart
The Conservatives losing the next election is an absolute certainty as long as race-obsessed supporters like rebbiker befoul their respectable public image.

I stand four-square with my fellow democrats in the Scottish Conservative & Unionist Party in their fundamental opposition to the politics of race conflict. Decent mainsteam politicians unite in opposing the far-right wherever it raises its distorted features.

I genuinely sympathise with decent Conservatives who have to deal with idiots like rebbiker.

Neil Craig
David
You should find a picture of Churchill raising his fingers while holding a cigar - it would make the point about the nanny state even better.

Stuart
The fact that some Tory MPs actually care enough to fight ID cards, while Labour will do absolutely anything for the power Bliar gave them does not reflect badly (at least comparatively) on the Tories.

rebbiker
The libertarian strand of the Conservative party will lose this one and we need to look at the root cause of this ID card requirement.When the UK was an overwhelmingly Caucasian society,ID cards were not necessary except in time of war.Now that England and England Jr(otherwise known as Scotland) have imported so many Third World pests, the hapless Brits must now forfeit some ancient freedoms.

Stuart
-"...where some senior Tories argued vociferously against the move, party sources told the BBC."

This is the heart of the matter: the Conservative Party are about to rip themselves apart over this issue, just as they did over Europe. Many of us are going to enjoy the spectacle tremendously.

rebbiker
When can we expect Dickson, the SNP's pre-eminent drivel generator, to make sense?