That's what Annabelle Ewing MP called the Defence Secretary earlier in the week when he announced the abolition of all of Scotland's regiments. Ms Ewing can be seen here marching along Princes Street today along with Conservative and Liberal Democrat colleagues: 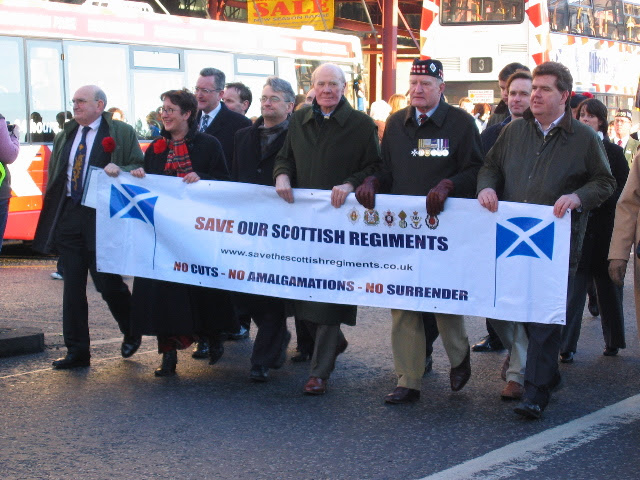 A more moderate description of the target of today's march was this: 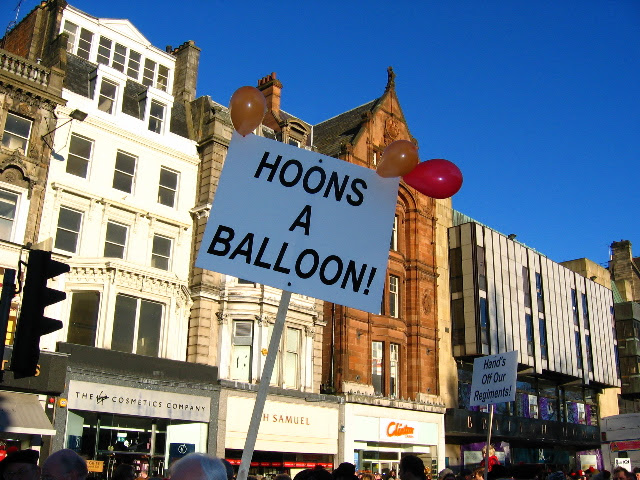 Judging by the march's reception from the Christmas shoppers neither Mr Hoon nor Mr Blair would have been welcome in Edinburgh today.

People of all ages took part in and watched the demonstration: 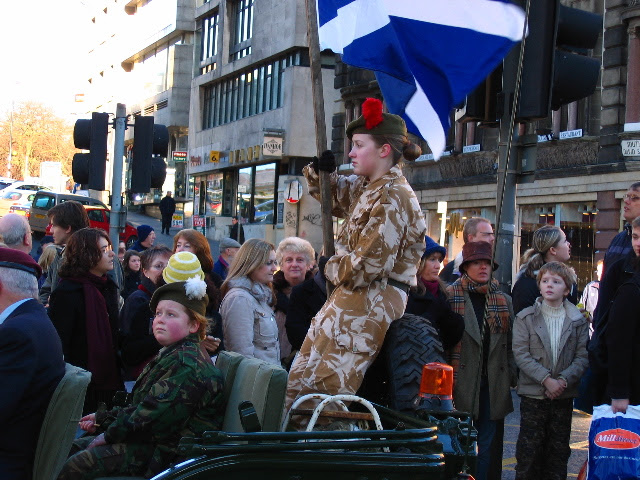 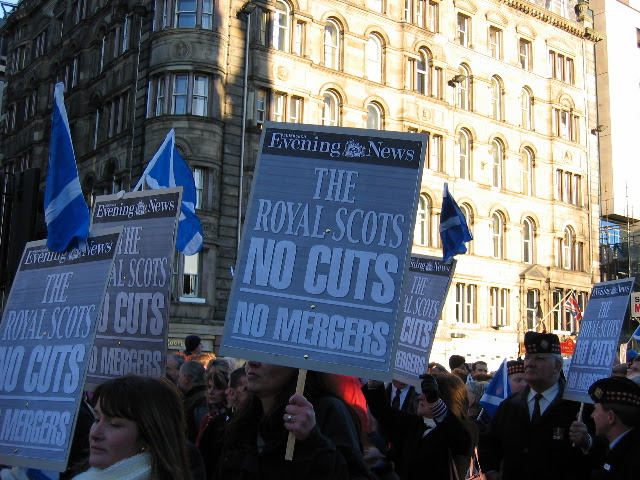 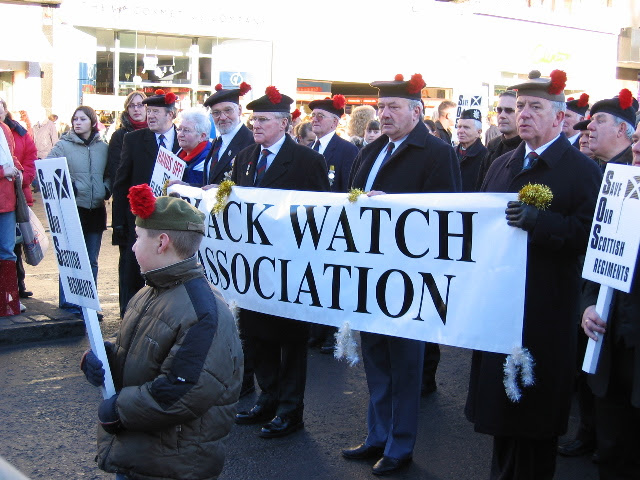 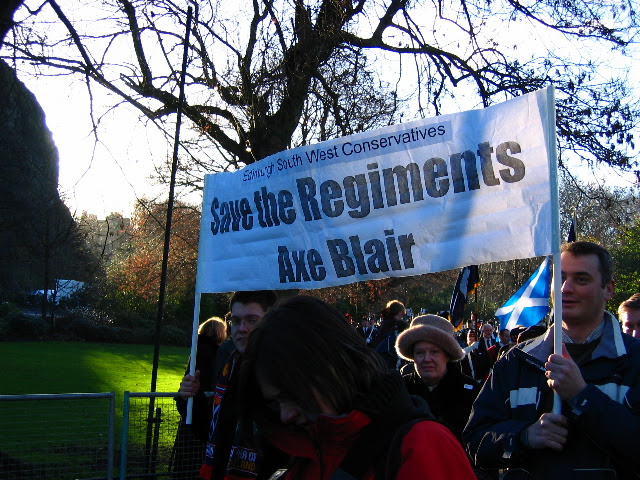 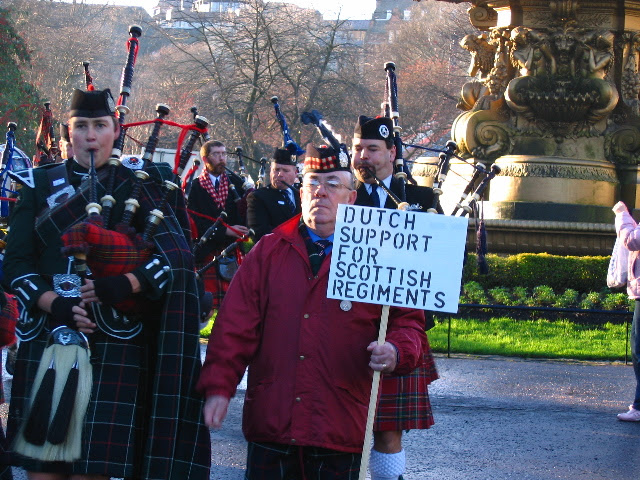 And at the end of the march: 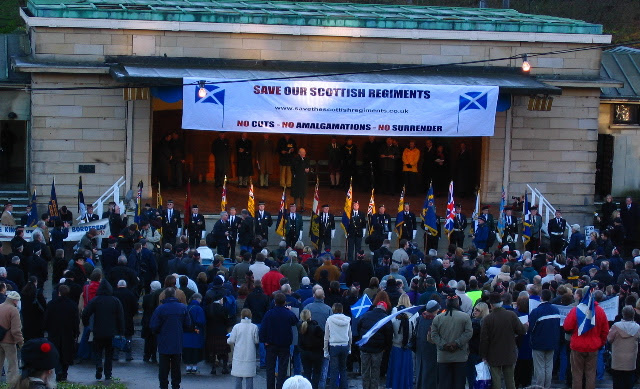 Neil Craig
Not trying to backtrack but I do support the Falklands War merely that I think there is a case against it (mainly that by St Augustines definition of a just war the price was to high for the prize). However I think it was useful in supporting the rule of law making all nations with aggressive neighbours more secure - something which has been much more than negated by the Yugoslav & Iraq aggressions.

My point is that we must judge any military action on it's own merits. We cannot just hand in our consciences to the UN any more than we once did to King & Country.

David Farrer
Is that not more aspirational than hoping to provide the kilt wearing PBI (poor bloody infantry) of the British Empire/American Empire/UN.

I don't disagree too much with that (although not re the Falklands). However, the government has shafted the Army by the timing of its announcement, especially as far as the Black Watch is concerned.

At the demonstration a retired senior officer (possibly former head of the BW) reported on a visit to Geoff Hoon. The minister was asked if any of the Guards regiments would be similarly merged. "Oh no. That would interfere with their ceremonial role in London", was the reply!

Neil Craig
While I don't consider myself right wing howabout Scotland developing the fastest growth rate in the UK (thus quickly becoming the most developed part), becoming a technological & scientific leader, participating in the next space race , upholding freedom, developing modern housing & transport thus making this a place people want to live irrespective of money & helping the spread of humanity.

Is that not more aspirational than hoping to provide the kilt wearing PBI (poor bloody infantry) of the British Empire/American Empire/UN.

PS I think the difference between nasty imperialist wars (bombing Yugoslavia, Iraqi Invasion, arguably even the Falklands) & nice UN approved police actions (occupation of Kosovo{6,000 murdered, 350,000 ethnically cleansed, ?,000 schoolgirls kidnapped into sex slavery}, occupation of Iraq, Gulf 1, Korea) to which we could obediently offer our troops is not that simple.

Stuart
Well, it is clear that there are a lot of Scotland-haters out there (and a Sweden-hater). What always amazes me is how you "libertarians" slag the Scots off, day-in, day-out, and then profess surprise when so few in Scotland are interested in voting for right-wing candidates.

I would like to see some positive, aspirational visions of the future coming from the right. Even David Farrar too often succumbs to extreme negativity.

Uno Larssen
Perhaps an independent Scotland will, like Sweden, have its foreign policy endorsed by Osama bin Laden.

Just what I said! Except the conceited bit, I mean obviously that will not happen!

You know it makes 'sense!

And did those feet in ancient time
Walk upon Scotland's mountains green?
And wis the holy Lamb of God
On Ayrshire's pleasant pastures seen?

And did the Countenance Divine
Shine forth upon oor clouded hills?
And wis Jerusalem builded here
Among these dark satanic mills?

I will not cease fae mental fight,
Nor shall ma sword sleep in my haun,
Till we huv built Jerusalem
In Scotland's dreich and pleasant land.

Stuart
The SNP sees the armed forces as necessary for defence, policing territorial waters and for contributing to international peace-keeping assignments. This will involve putting Scottish soldiers in dangerous situations, and almost certainly fighting, wars and death. The same role as similarly-sized Sweden's, Finland's or Ireland's armed forces.

Post-independence Scotland will be a typical northern European nation: rich, pluralistic, slightly conceited, and widely envied. The SNP will not necessarily govern post-independence: that is up to the Scottish electorate.

Vote for independence - vote for self-respect.

Little Drummer Boy
The SNP wants to retain all Scottish regiments at their current levels, but doesn't actually want them to fight in any wars, ever.

And while we are at it, did you know that when the SNP takes power we Scots are all going to be much better off, but at the same time the free market will be tamed, and private profiteers will be sent fleeing and everyone will be equal and there will be no poverty and we will be the envy of nations all!

You are being very unfair to Labour, Tories and LibDems. I am fairly certain that they do not want to see Scots killed either!

Neil Craig
Her remark was entirely staged & I disapprove of breaking Parliament's rules just to posture. The English language is sufficiently flexible that you can say anything, certainly much worse than "backstabbing coward" without using offensive words.

Whether the regiments should go or not depends on what we expect our armed forces to be doing for the next generation. If it is mainly going to be occupying foreign countries then the regiments should be retained. If the armed forces are to defend Britain & to project enough power to intimidate without occupying then they shouldn't & the money is better spent on high tech air, sea & space defence.

The unusual alliance of Tories (who want a Victorian army), SNP (who want an army with lots of Scots as long as Scots don't get killed), socialists (who want a make-work programme) & it appears libertarians who want to kick Labour don't hang together well. Labour deserve a thorough kicking on very many things but this is not one.